Zombie Gras was one of the six scarezones that was featured during Halloween Horror Nights: Twenty Years of Fear. It was located in San Francisco.

For their 2010 Halloween event, Universal decided to have a scarezone based on a Mardi Gras parade overrun by zombies. The scarezone would be called Zombie Gras, and would tie-in to the story of the ZombieGeddon haunted house, which was located near the scarezone.

This Mardi Gras parade has gone severely off course and the undead walk among us.

Feet don't fail me NOW! This Mardi Gras parade has gone severely off course-Infected by the North American zombie infestation, the undead walk among us, searching for their next meal...

Zombie Gras enhanced the story-line of ZombieGeddon. In the house, a sudden power failure causes the zombies' collars that maintain their docility to fail and leads to the ZAP facility being overrun. Upon exiting the facility, you discover the cause: a Mardi Gras parade crashed into the power lines outside the building, allowing the zombies to escape and infect the parade. 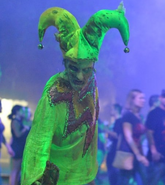 Photo from Jared Clemons on Facebook.
Add a photo to this gallery

Retrieved from "https://halloweenhorrornights.fandom.com/wiki/Zombie_Gras?oldid=108633"
Community content is available under CC-BY-SA unless otherwise noted.