Yeti: Terror of the Yukon was one of the ten haunted houses that were featured during Halloween Horror Nights 29. It was located in Soundstage 24.

On June 24th, 2019, Universal announced that a haunted house based in a Canadian logger camp being attacked by a Yeti would be coming to their Halloween Horror Nights event that year. The codename for this house was "Jerky", a reference to the Jack Link's Beef Jerky commercials that had a Sasquatch.

The house would be one of two located in Soundstage 24, the other one being Us. Soundstage 24 is one of the larger soundstage facilities designed to be used as filming locations for movies and television shows.

In a remote part of Canada, loggers and trappers seek refuge from the elements. You're in Yeti territory, and they'll stop you cold.

YOU'LL BE FROZEN WITH FEAR

In a remote part of Canada that's all but uninhabitable, loggers and trappers seek refuge from the cold in an isolated camp. But there is no escape from beasts as brutal as the winter.

Enter a logging camp that's been torn apart, floors caked with snow and gore. Right outside, screams are frozen on the faces of those who fled the towering monsters only to succumb to the elements. Cringe at the trail of blood leading to caves no humans have lived to see.

You're in Yeti territory, and they'll stop you cold.

Deep in the remote tundra of the Yukon, loggers and trappers seek refuge from the frigid grip of an arctic blizzard. But out in the darkness, a terror lurks far more dangerous than the deluge of snow and ice. These unfortunate souls have intruded into a territory that is haunted by their worst nightmares. Enter a logging camp that’s been torn apart, floors caked with snow, bones and gore. Right outside, screams are frozen on the faces of those who fled the towering monsters only to succumb to the elements. But there is no escape from beasts as brutal as the winter.

Just when you thought the only thing to fear was the elements, an icy terror will descend over you. Cringe at the trail of blood leading to caves none have lived to see. As you enter the labyrinth of caves, you’ll hear the screaming echoes of those who couldn’t escape the inevitable. If you survive long enough to see the end, you’re likely to find the remains of those who came before you and meet their same demise. You’re in Yeti territory now. They’re stone cold vicious and will stop at nothing for a taste of blood. If the cold doesn’t get you, they will.

Guests entered the line through the Jimmy Fallon ride queue. Guests would walk down the hallway with the history of the NBC logo before reaching the area where the regular and express lines split. Guests would then make their way to the left side of Soundstage 24 where the queue would loop a few times. They would then enter the soundstage from the back. As guests enter, they would be able to see a cabin with a gigantic hole ripped through it. Snow falls from above and the temperature has a noticeable drop. Guests then enter the hole in the cabin into the house.

After entering through a couple of rooms in the cabin, guests would exit through the back where they are greeted by the entrance to Shadow Creek Camp. To the left a Yeti pops out, while on the right guests could see a cabin. Inside the window, guests could see a Yeti killing some campers. Popping out behind a tree on the left, Ben Macready would shoot at guests. The next scene was the inside of the cabin with windows where guests could see a camper impaled on deer antlers that were hung up on a wall. In the same room, a Yeti eating a man's intestines (who was a scareactor) on a table could be seen on the left while Old Beard with a shotgun jumps out on the right. Guests would then enter a small "outdoor" hallway that leads to a tent.

Inside the tent, guests could see the projection of a Yeti killing someone outside the tent. A Yeti would jump out from behind a curtain on the left. After another small "outdoor" room, guests would enter another building, where a man with no arm could be seen. A Yeti then comes up from behind him and shoves his arm through the man's chest. Meanwhile, another Yeti pops out on the right. Guests would then go back "outside" and enter the sawmill, where a villager tells guests to be quiet. As he does this, a Yeti comes through a door in front of him, crushing him. Behind a bush, Lumber Jill could be seen being mauled by a Yeti on the right. Entering a barn, guests could see a wooden door that is being banged on outside by some unseen horses. Across from them, a giant burning hole in the wall could be seen. Behind it, a villager pretending to be dead (with part of his face ripped off) could be seen.

Going back "outside", guests would enter a large trench-like area. Above on a log, a Yeti would reach down at guests. Above, a Yeti could be seen roaring as another villager comes out with a shotgun, shooting at both guests and the Yeti. The next scene featured the Yeti's icy cave lair, where many of their half-eaten victims could be seen. Through a hole in the wall, a Yeti would attack guests on a platform while another from behind would jump out. The final scene featured a dark forest, where three Yeti's (the last one being on an elevated platform) would jump out at guests. After leaving that room, guests would exit the house. 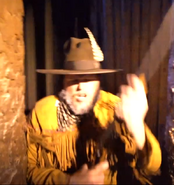 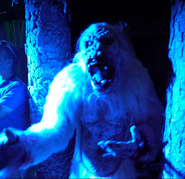 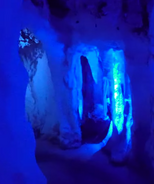 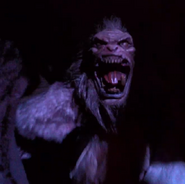 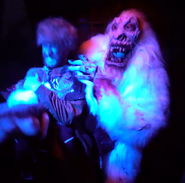 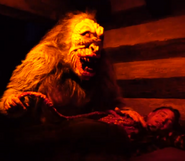 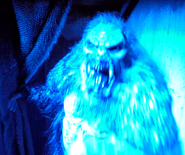 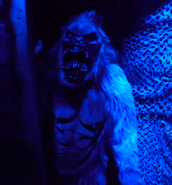 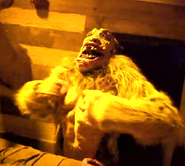 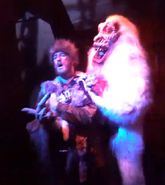 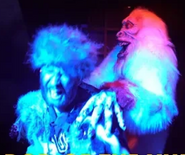 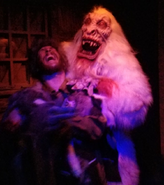 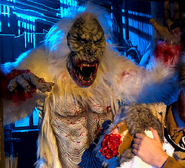 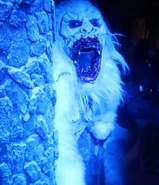 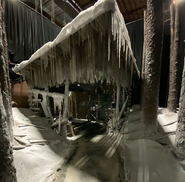 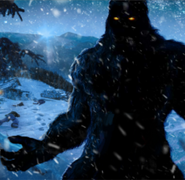 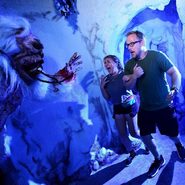 [Picture from AdventureByDaddy.com]
Add a photo to this gallery

Retrieved from "https://halloweenhorrornights.fandom.com/wiki/Yeti:_Terror_of_the_Yukon?oldid=117022"
Community content is available under CC-BY-SA unless otherwise noted.