Where Evil Hides was one of the seven haunted houses that was featured during Halloween Horror Nights: Tales of Terror. It was located in Soundstage 18.

For their 2005 event, Universal created their own demented country that runs on blood and sacrifice. Two of the soundstage haunted houses Universal chose to have at the event were based on the primal fears of humans. Where Evil Hides was one of these houses. It chose to prey on common childhood fears like thunder and the monster in the closet.

The house would be sort of an icon house for The Storyteller as it took place in her estate called the North Hollow Household.

The house would be located in Soundstage 18, one of the larger soundstage facilities designed to be used as filming locations for movies and television shows. This would be the first and only time this soundstage was used for a haunted house as the soundstage would eventually be used to hold the Blue Man Group show.

Remember the worst fears of your imagination that lurked under the bed, in the closet, and under the stairs? They're back!

Beyond Maldaken Pass lie the very places in mankind's worst nightmares where night terrors are real. The places where the monsters live, the skeletons are stored and the bodies are hidden. The places in the imagination where terror plays hide-and-seek with the unfortunate dreamer. Once inside, one faces all of those dark hallways, passages and doors that open to exactly what one had hoped they did not.

Where Evil Hides was one of the two "Trials of Fears" beyond the portal Maldaken Pass located in the North Hollow. These were used to determine who was worthy of sacrifice to the Terra Queen. This was also the only house where the Storyteller herself actually appeared. She brought to life childhood fears, such as the Bogeyman, the man in the closet, the people under the stairs, and, of course, the monster under the bed. The haunted house took place in the North Hollow Household. The exterior of the household was a typical suburban house, amidst a lighting storm. Before entering the house, it’s also notable that this house was two stories (you can’t face all your childhood fears without a trip to the Attic).

On the map of Terra Cruentus found on the Halloween Horror Nights: Tales of Terror website, visitors could click on and view the The Hollows region of the map. In the North Hollow, they could access the website page for Where Evil Hides by clicking on an open door. On the page, guests could see a fortune teller's table with a crystal ball, a lamp, multiple blueprints, and tarot cards. Clicking on the blueprints shows a short video of the outside of the house and spooky images hidden inside. Visitors could also click on the crystal ball with a short video clip describing the house. Finally, guests could click on the tarot cards to see the Terra Cruentus symbol and the various parts that make it up, as well as an advertisement for the fortune teller Madame Sandra. 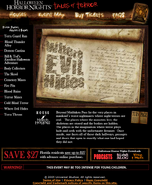 Images are from the Halloween Horror Nights: Tales of Terror website page until otherwise noted. 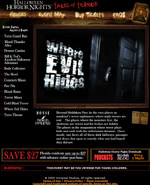 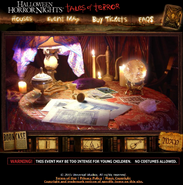 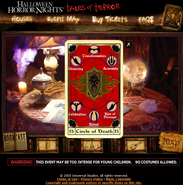 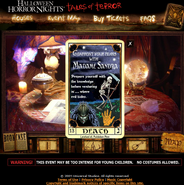 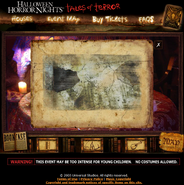 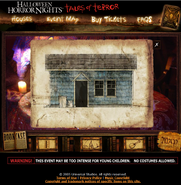 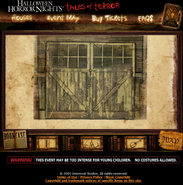 The concept art for the facade of Where Evil Hides. The rest of the images are from the Halloween Horror Nights: Sweet 16 website page. 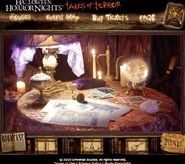 Audio that played on the Backstory Page: Fens of Sargath by Midnight Syndicate

Audio that played when the Blueprints were clicked on in the Backstory Page:

Audio that played when the Crystal Ball was clicked on in the Backstory Page:

Entering the house, guests would enter a child's bedroom, where they would see a terrified little girl. A monster under her bed attacks guests and guests then enter a room with a monster in the closet. Scareactors in this house also included werewolves, a vampire, a Michael Myers-esque slasher, demons and ghouls. At one point guests would go upstairs to the attic, where The Storyteller herself could be seen holding a book. A man on a bed of nails also appeared.

According to this the order of scenes was as follows: facade, corridor, wolf bedroom, squared staircase with vampire, vampire attic, Storyteller scene, basement, and garage finale.

A promotional picture of the attic vampire scene 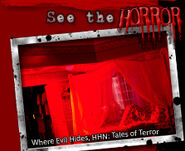 a pic from the defunct Vault 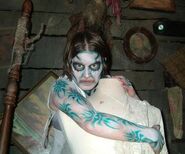 From Screamscape
Add a photo to this gallery

Retrieved from "https://halloweenhorrornights.fandom.com/wiki/Where_Evil_Hides?oldid=117830"
Community content is available under CC-BY-SA unless otherwise noted.