Vampyr: Blood Bath was one of the eight haunted houses that were featured during Halloween Horror Nights: Carnival of Carnage. The house served as a sequel to Castle Vampyr and Blood Masquerade. It was located in Nazarman's.

In 2007, Universal decided to have an original haunted house that served as a sequel to the popular haunted house Castle Vampyr and the scarezone Blood Masquerade during their Halloween Horror Nights event that year. The house would be titled Vampyr: Blood Bath and would be set in a nightclub in New York inhabited by vampires.

According to a letter, there were dissenters from the Castle. The vampires from Castle Vampyr have expanded, taking over a New York City nightclub where they lure their victims with sex, drugs, and rock n' roll before kidnapping and slaughtering them.

On the backstory page, visitors would see a desk overlooking the New York City nightclub that the Vampires have infested. On the desk, guests could click on a note to see a mysterious ancient message. Clicking on the note again reveals what the message says, which expands upon the lore o the vampires who travel from city to city infesting various areas. Also on the desk, visitors could click on a cell phone to read messages about someone going to a rave, and an invitation to the rave.

n the carnival page, guests could click on a Burlesque Tent to see a three layered circle. Each layer had a certain number of symbols, and guests had to rotate each layer to form the correct pattern. The solution is shown in the images below. If visitors correctly solved the puzzle, they would be rewarded with a secret video of the house. There was also a hint to the symbol in Jack's bus, as well as the city of Greenwich marked on a map.

Image from the now defunct Horrornights.be.

Website hint for the carnival puzzle. Image from the now defunct Horrornights.be. 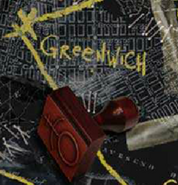 HHN 17- "Vampyr- Blood Bath" House Preview
Video that played when the carnival puzzle was solved.
Add a photo to this gallery

Music that played on the backstory page: Blackest Rose by Midnight Syndicate

Audio that played when the phone messages were clicked on:

Music that played on the rave invitation on the phone: Bump & Grind by Bjorn Lynn

Audio that played when the mysterious note was clicked on a second time:

Audio that played on the Carnival Page when rotating the symbol:

Guests would enter the queue at the south end of Delancey Street (near Soundstage 44). The queue would go up Delancey Street. As two scantily-clad vampire women danced on the Blues Brothers stage, the queue line to enter terminates at the entrance to the Vampyr nightclub in Sting Alley. The symbol of the vampyrs appeared hanging outside the entrance to the house. A blonde mohawked bouncer in a red suit and sunglasses welcomes everyone in.

Guests passed through a small lobby. A glass counter displays various glowing merchandise for sale, but no cashier is present.

The dance floor itself is a large room with high ceilings and wrought iron chandeliers, with what appears to be bodies impaled on them. Women dance on raised stages along the walls, fans whip the white curtains along the walls into the air, and guests move around the tables as a vampire swings from the chandelier and swipes at them.

Entering a long hallway lined with doors, guests can hear sounds of violence and pleading from the other side. Several doors slam open, revealing half-clothed vampires angry at the interruption of their feeding. In another room, two leather-clad females hold a chained slave in a small "love shack" alcove off to the side as they transform him into a vampire.

Entering the kitchen, guests find it filled with body parts of all shapes and sizes. A pair of vampires alternate between feeding from the gore and swiping at the line.

Exiting the house, guests enter an alleyway that's been blocked off by ramshackle fences on both ends. They continue down the alley, vampires hidden in doorways, down stairwells, and behind trash cans and dumpsters. Eventually, the line turns around at the fence and enters the building across the alley from the club.

The next building appeared to be an abandoned office building. At the other end of the hallway, elevator doors opened to reveal a vampire girl sitting on top of the stalled elevator and eating a white dog. Another vampire appeared from a doorway next to the elevator.

Guests entered a massive warehouse filled with wooden crates, bodies in various states of freshness and mutilation hanging in their path and vampires hidden among the debris. As guests ran for the exit out onto the waterfront, a massive vampire -- transformed into a humanoid bat -- flew at them from the ceiling.

Image from HHN Archive site
Add a photo to this gallery

Retrieved from "https://halloweenhorrornights.fandom.com/wiki/Vampyr:_Blood_Bath?oldid=117395"
Community content is available under CC-BY-SA unless otherwise noted.