Us (Hollywood) was one of the ten haunted mazes that were featured during Halloween Horror Nights 2019 (Hollywood). It was located in the Tram Warehouse.

Jordan Peele’s new original nightmare comes to life when you follow in the footsteps of the Wilson Family as they face the ultimate opponent: themselves. You’ll freeze in terror and disbelief as you are hunted at every frightening turn by murderous doppelgängers — terrifying doubles of every American known as the “Tethered.” Having languished for generations throughout thousands of miles of abandoned underground tunnels, these human “copies” have organized, surfaced, and staged an uprising. You can run and you can hide, but you cannot escape the Tethered version of yourself.

The facade was the Vision Quest Funhouse with lights on it. The audio was a mix between "I Got 5 On It (Tethered Mix)" and "Anthem". Guests would go up a couple of ramps before entering the maze.

Inside the Vision Quest funhouse were lanterns, forest-themed wallpaper, and mirrors. Guests would be startled by an Owl Animatronic that comes alive to scare guests. Guests would then travel down a hallway where a mirror could be seen at the end. A light would come on revealing the backside of Young Adelaide Wilson. Guests would then walk into another hallway of mirrors and forest wallpaper before entering a short black hallway.

After exiting the black hallway, guests were transported to the driveway of the Wilson House where foliage and tree branches surrounded the walls. Guests came face to face with the Tethered versions of the Wilson Family with a lamppost above them. Guests would be attacked by Pluto before entering the Wilson House.

Guests would walk down a short hallway where Red would pop out from the right with a pair of Scissors. Guests would turn left and come across a Facade of the Neighbor's house. Before entering guests would be scared by a Car with Umbrae on top of it from the right.

Inside the Neighbor's house was a TV with News footage of the events around the world and you can see the Twins from up above watching and holding hands. You would see Kitty and Josh dead on the floor next to each other. Tex would then pop out from a dark hole where he would put his hand out to guests only to slick his hair back. Before exiting the scene guests could see Dahlia in front of a small mirror cutting herself with Scissors. Guests would then enter a short hallway with paintings.

After the short hallway was a Small room where the Twins are dead laying side by side and then guests would go down a hallway with 2 doors and from those 2 doors Io and Nix would pop out at the same time. Guests would then exit the Neighbor's house.

Guests would come face to face with the facade of the Merlin's Forest Funhouse where there were dead bodies outside the facade. To the far right was a Pepper's Ghost effect revealing the 11:11 guy before he disappears. Guests would enter and find a continuation of lanterns, forest-themed wallpaper, and mirrors. Guests would then enter the passage into the Underground Tunnels.

Guests would go down a hallway with small bunnies in the scene and Red would pop out from the left while at the end of the hallway there was a Tethered playing the Carnival Game from the Boardwalk. Guests would then enter the classroom scene.

In the Classroom scene was flashing lights where the cages of the Bunnies were opened. And in front of the chalkboard was Red holding up paper figures before then being attacked by Adelaide Wilson which Red would stop and push back away from her. Guests would go left into a small room with a Hands Across America Shirt and paper figures before entering the Finale Scene.

The Finale Scene was a black room with static figures of Tethered holding hands (Hands Across America). There were 5 scare actors in the room pretending to be static who would then pop out at guests. Guests would then exit the maze. 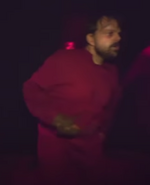 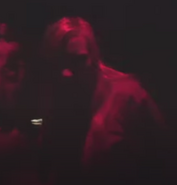 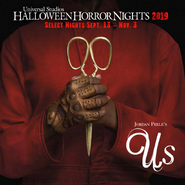 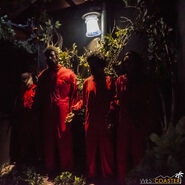 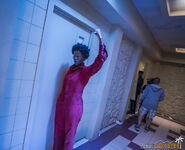 Exit Music)
Add a photo to this gallery

Down the Rabbit Hole - Us OST

Finale - Us OST
Add a photo to this gallery

Retrieved from "https://halloweenhorrornights.fandom.com/wiki/Us_(Hollywood)?oldid=118694"
Community content is available under CC-BY-SA unless otherwise noted.