"Even after death she found no rest. Heaven will not take her, she was damned for all time to wander the earth, searching for her dead children. Now they call her by a different name. La Llorona." - Queue video excerpt

Urban Legends: La Llorona was one of the eight haunted houses that was featured during Halloween Horror Nights 23. It was located in Sprung Tent 1. The house was based off of the Latin/American myth of La Llorona.

She is known as The Weeping Woman. Her legend is one of tragedy… and of murder. She drowned her children in the cold, watery depths and now torments all who hear her with icy, mournful cries. Forced to walk the Earth for eternity, she seeks others to share her pain and suffering, now and forever.

The weeping woman's cries for her children send chills colder than the depths in which she drowned them. She walks the earth seeking others to share her pain.

As guests approached the tent, they would see the facade of an Old Mexican Church. Various props were laid outside the church to give it a more authentic feel. A queue video was projected on the church detailing the backstory of La Llorona. Guests would enter the house through the front door of the church. 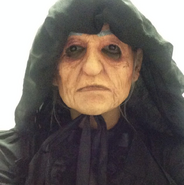 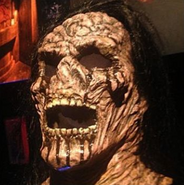 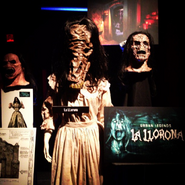 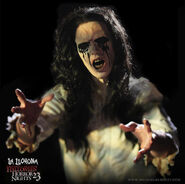 Figure - Symphony Of The Damned Interlude (Monsters Vol.4 Out Now)

Mexican Devil Disaster
Add a photo to this gallery

Retrieved from "https://halloweenhorrornights.fandom.com/wiki/Urban_Legends:_La_Llorona?oldid=117292"
Community content is available under CC-BY-SA unless otherwise noted.