It is usually the location for Halloween Horror Nights Orlando.

Unlike its sister facility, Universal Studios Hollywood, which was a working film and television studio that became a tourist attraction and ultimately a theme park, Universal Studios Florida was designed as both a theme park and a studio from the start. A major component of the original park in Hollywood is its studio tour, which featured several special-effects exhibits and encounters built into the tour, such as an attack by the great white shark from the film "Jaws". For its Florida park, Universal Studios took the concepts of the Hollywood tour scenes and developed them into larger, stand-alone attractions. As an example, in Hollywood, the studio tour trams travel close to a shoreline and are "attacked" by Jaws before they travel to the next part of the tour. In Florida, guests entered the "Jaws" attraction and boarded a boat touring the fictitious Amity Harbor, where they encounter the shark, then exited back into the park at the conclusion of the attraction. Universal Studios Florida originally had a Studio Tour attraction that visited the production facilities, but that tour has since been discontinued.

Over the years, Universal Studios Florida has not limited itself to attractions based on its own vast film library. It has occasionally licensed popular characters from other rival studios, many of whom did not operate theme parks themselves. Some examples include the Ghostbusters and the Men in Black (from Sony's Columbia Pictures), Jimmy Neutron (from Viacom's Nickelodeon), the Simpsons (20th Century Fox), and Shrek (from Dreamworks Animation).

Like all theme parks, attractions are sometimes closed due to age and replaced with more contemporary attractions. Universal has seen this action used a great deal of times, with many attraction closures such as Kongfrontation, Back to the Future: The Ride, Earthquake: The Big One, and The Funtastic World of Hanna-Barbera. Some closure, such as those of Kongfrontation and Back to the Future: The Ride as well as Jaws, have proven drastic to longtime visitors and have been given homages by the park.

Production Central serves as the park's main entrance. The section is a cluster of motion picture soundstages, each of which houses attractions inspired by today's most popular films and television shows or actual film & television filming.

Along Hollywood Boulevard, guests will see recreations of some of its greatest monuments, such as Schwab's Drug Store and Mel's Drive-In.

Within this section's boundaries can be found architectural styles and sets that resemble the New York of yesterday or today.

Face Jimmy Fallon and all your favorite characters from NBC’s The Tonight Show in a thrilling race through, below and above New York City.

This section is themed to the architectural style of the city of San Francisco as well as a large port-side warehouse.

World Expo takes its inspiration from the international expositions of the 20th century. It combines ultra-modern architecture as seen from the 1960s and today. Theming in the area includes various flags of world countries and of The Simpsons' characters.

This area is themed to the wizarding shopping destination of Diagon Alley, from the Harry Potter franchise.

Inside Gringotts you’ll walk through the bank’s grand marble lobby and see goblins hard at work. Then take a journey through cavernous passageways that lead deep underground. This multi-dimensional thrill ride puts you right in the middle of the action and seamlessly melds the latest cutting-edge technologies and live special effects to create a completely immersive, unforgettable adventure.

Guests with an Explorer ticket can pass through the brick wall onto Platform 9 ¾™, board the train at King’s Cross Station in Universal Studios Florida™, and travel to and from Hogsmeade™ Station in Universal’s Islands of Adventure™, enjoying a different experience each way.

A large lake located in the middle of the park.

Universal Studios Florida features several seasonal events throughout its operating calendar. Some are included in the daily park admission, while others are separately-ticketed events. 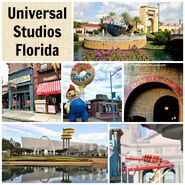 Retrieved from "https://halloweenhorrornights.fandom.com/wiki/Universal_Studios_Florida?oldid=101863"
Community content is available under CC-BY-SA unless otherwise noted.