Universal Monsters Remix: Resurrection was one of the six haunted mazes that was featured during Halloween Horror Nights 2013 (Hollywood). It was located in the Year-Round Haunt Venue.

Universal's infamous legacy of horror is brought to life in a terrifying experience made for the 21st century. Immerse yourself in a modern horror-inspired soundtrack to your merciless slaughter, courtesy of Figure, and follow the trail of entrails through darkened corridors as you enter a crypt of bloodthirsty creatures. There's no escaping the monsters that started it all. Don't worry, it won't hurt…for long! 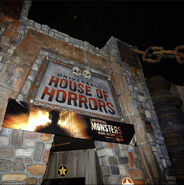 Credit to: adventures_in_the_everyday on Instagram
Add a photo to this gallery
Retrieved from "https://halloweenhorrornights.fandom.com/wiki/Universal_Monsters_Remix:_Resurrection?oldid=116024"
Community content is available under CC-BY-SA unless otherwise noted.