Start a Wiki
WARNING! This page contains information from an event that is still going on. If you wish to remain spoiler free, do not read on.

Universal Monsters: The Bride of Frankenstein Lives was one of the two haunted houses that were featured in the "Halloween Festivities" at Universal in 2020. It was located in Soundstage 23.

For their 30th Halloween Horror Nights event, Universal wanted to create another haunted house based on the Universal Classic Monsters. The house would be a sequel to the previous year's Universal Monsters house. The Bride of Frankenstein Lives would pick up where the last house ended, with Frankenstein's Laboratory being reduced to rubble.

After Halloween Horror Nights 30 was cancelled, Universal announced on September 14th, 2020 that two haunted houses were coming for a Seasonal Experience that year. Bride of Frankenstein Lives would be one of the two chosen.

“We belong dead.” The last words of Frankenstein’s monster on that fateful night when his Bride rejected him. But his end was her beginning. Now the Bride is stepping out of the shadows to bring him back. And there’s nothing she won’t do as she sharpens her brilliance by experimenting on unsuspecting victims. The mate will have her monster. And the monster his mate.

"What happens after the tower explodes at the end of Universal Pictures' 1935 horror classic, The Bride Of Frankenstein? Who or what survived?

In the film, Frankenstein's Monster demands that his creator build him a mate, since humanity has rejected him. But The Bride also rejects him, unleashing her now infamous scream. In a moment of despair, The Monster responds with the immortal line, "We Belong Dead!" and flips the switch to bring down the castle on top of them. This is the last we saw of The Bride o Frankenstein... until now.

"The haunted house will tell what happened next. Determined to revive The Monster, The Bride harvests the blood of the fiendish Brides of Dracula in hopes of resurrecting him.

One thing is certain: The Mate will have her Monster and The Monster his mate.

The extended queue for the standby line looped around the inside of Soundstage 21.

Inside the house, guests would walk down a long hallway of black curtains while the soundtrack from the Bride of Frankenstein played.

After reaching the end of the hallway, guests would enter another hall which had a giant brick wall on one side. Peeking through the bricks, guests could see the destruction of Frankenstein's Castle from the ending of Bride of Frankenstein.

After entering the crumbling castle, guests enter a small laboratory where Frankenstein's Monster could be seen lying on a table. His corpse was missing an arm, a leg, and part of its torso. Guests could also see the Bride screaming over the corpse while trying to fix it. The Bride's narration in the background lets guests in on the story: After the explosion of the castle, the Bride realized that she actually loved Frankenstein. After his death, she decided to study Dr. Frankenstein's lab notes and books to find a way to bring Frankenstein back to life. This backstory is also reflected in the Bride's design after this point, as she now wore Dr. Frankenstein's lab coat and goggles.

Entering the next room, guests would see the silhouette of the Bride behind a curtain made of stitched skin. Her shadow could be seen gathering various body parts. Frankenstein's corpse could also be seen in this room, now with his arm, leg, and torso healed. The Bride of Frankenstein's Assistant jumps out on the left, telling guests that they should not disturb the Bride during her work. After this, the Bride of Frankenstein learns that the vampiric blood of Dracula's Brides could bring dead people back to life.

The final rooms took guests through a hallway, where the severed heads of the Brides of Dracula could be seen on stakes above. At the very end, The Bride of Frankenstein and Frankenstein's Monster attacked guests together from both sides.

The facade for the haunted house. Image from JoJo's World on Youtube. 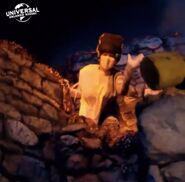 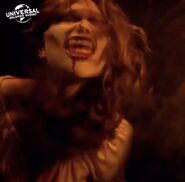 Retrieved from "https://halloweenhorrornights.fandom.com/wiki/Universal_Monsters:_The_Bride_of_Frankenstein_Lives?oldid=101724"
Community content is available under CC-BY-SA unless otherwise noted.