Universal Monsters was one of the ten haunted houses that were featured during Halloween Horror Nights 29. It was located in the Second Parade Warehouse.

On April 29th, 2019, Universal announced that a haunted house based on the Universal Classic Monsters would be coming to their Halloween Horror Nights event that year, due to the popularity of the maze with the same concept in Hollywood the year before. The codename for this house was "Onyx", a stone that comes in both black and white colors.

Frankenstein. Dracula. The Wolfman. The world’s most terrifying monsters have come together to tear you apart. It’s the more, the scarier.

THE WHO'S WHO OF HORROR ARE AFTER YOU

Frankenstein. Dracula. The Wolfman. The world's most terrifying monsters have come together to tear you apart. Flee through a dark Bavarian forest as the howls of the savage Wolfman grow ever closer.

Try to escape from the manmade monster within Dr. Frankenstein's laboratory. Face the fanged terrors in Dracula's castle. From the vicious Creature of The Black Lagoon to the ancient evil of the Mummy to other untold horrors, it's the more, the scarier.

The queue entered from the outside of the entrance for A Day in the Park with Barney. You would walk through the pre-show area for Barney and exit out the back. You would then go along a road that wraps around the pavilion that contains some parade floats. You then go around the back of the pavilion which leads you to the front of the Second Parade Warehouse. Painted on the wall of the Second Parade Warehouse was a giant painting that showed the logo of the house. At night, projections would play on the side of the building depicting some of the various Universal Monsters depicted in the house. Guests would then go around to the door and into the house.

Entering the house, guests would be greeted with statues of the Universal Monsters (each bearing the likeness of their original actors) outside of a large stone building in the middle of a forest as rain pours down. The statues included Gill-Man (whose statue consists of only his hands), Quasimodo, The Mummy, Count Dracula, Frankenstein's Monster, Erik, and The Bride of Frankenstein. Guests would notice an empty pedestal, before entering the stone building with the word "TALBOT" carved in it. Inside the building, guests would be blinded by a spinning blue light as they would get attacked by the statue of The Wolfman (the missing statue) on an elevated platform to the right. Next to the "statue" the silhouette of The Wolfman transforming can be seen. Further through the Wolfman room, guests would be attacked by the Wolfman, who would leap at guests through a hole in the wall as The Hunter shoots it. Going further down the crypts, another Wolfman would attack guests.

After that, guests would enter the Hunchback of Notre Damne scene, where they would be transported into the belltower of the Notre Dame Cathedral, with the corpse of Count Frollo above in the rafters. The room was filled with ropes and bells, with a giant pit at the middle. A Gargoyle statue would attack guests, while further down the room, Quasimodo would jump down from the rope before getting pulled back up (a scare working about half of the time). Guests would then enter The Creature From the Black Lagoon scene, where guests would find themselves underwater with seaweed hanging from the ceiling. Above, guests could see a boat, some lily pads, and a swimmer, and through a hole in the wall, guests could see an alligator. Three Gill-Men would attack from various places in this room.

Next, guests would go into Dracula’s castle where they would immediately be greeted with walls with coffins n them. One of Dracula's Brides jumps out of the coffins, as guests could hear Dracula calling them. Dracula himself would then reach out at guests from an elevated platform, before going back and hypnotizing a woman to become his next bride. Guests would then walk into a large room filled with various flying brides hanging above, as two of them attack guests. At the end of the scene, guests would be attacked by one final bride coming out of a coffin before entering the next scene. The scene feature two large stone feet, with hieroglyphics around the walls. Guests would hear demonic incantations, before being blast with air and having thunder strike. The following room had two Mummy's attacking from either side, with hieroglyphics covering the walls.

After that guests would enter The Phantom of the Opera scene. Guests would be startled, as the wall in front of them disappears to reveal the Phantom himself. Further through the scene, guests would be transported into a mirror maze, where three Phantoms would attack guests as organs blasted each time one popped out. The last room of the movie featured a fallen chandelier spewing electricity. The final movie of the house was The Bride of Frankenstein, where Dr. Frankenstein can be seen being electrocuted on a table while Frankenstein's Monster re-enacts the "we belong dead" scene from the movie while flipping a switch. The Bride of Frankenstein then jumps out from a hole in the wall, as guests walk further through the lab. Near the end of the scene, guests could see the hanging corpse of Fritz as another Frankenstein attacks from across. Guests would then enter the final room (with an unknown theme), where The Wolfman, Dracula, and the Bride of Frankenstein would all jump out. However, before they exit the house, one final Frankenstein would jump out from behind some black curtains, causing guests to run out of the house. 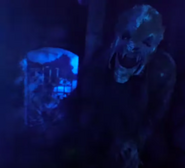 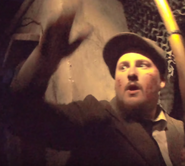 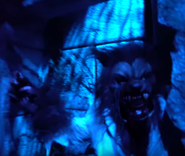 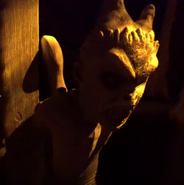 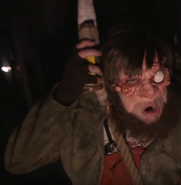 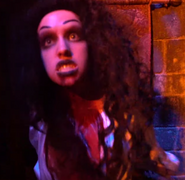 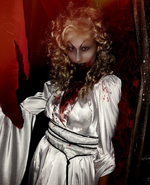 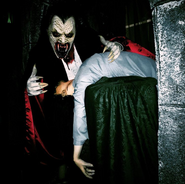 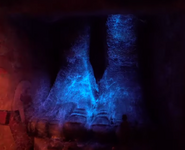 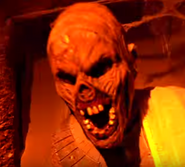 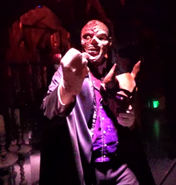 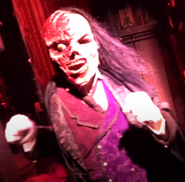 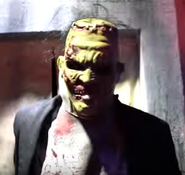 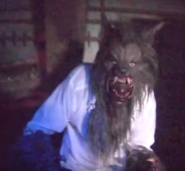 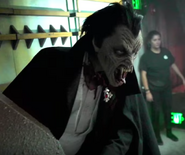 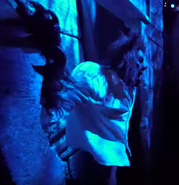 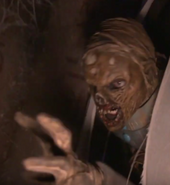 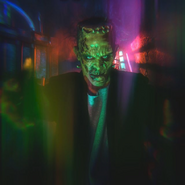 Dracula referenced for Universal Monsters in the HHN 2019 Commercial

Dracula referenced for Universal Monsters in the HHN 2019 Commercial 2