Universal Classic Monster Mania was one of the five haunted houses that was featured during Halloween Horror Nights X. It was located in the Earthquake Queue along with Dark Torment.

This house would be one of two located in the large extended queue for the Earthquake attraction, the other being Dark Torment.

According to this, the house took place one a movie set where a horror film was shot many years ago. However, the movie was never released due to the footage mysteriously disappearing.

Some reports seem to imply that many of the scenes in this house were black and white.

There was a Dracula room that took place in his castle. Dracula would come out with large sharp fangs and a bat head. Another room featured a giant Frankenstein strapped to a table in Frankenstein's Laboratory. Another scene featured a giant graveyard with a hand coming out of a grave. There was also a crypt with many coffins and a hand reaching out of one of them. The Creature From the Black Lagoon also appeared in a woody, swampy type area. The Wolfman also appeared as a giant, ripped wolf in this house. According to this, there was also a scene with floating mummy heads. 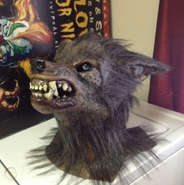 Possibly the Wolfman mask from this house.

From HHNYearbook.com
Add a photo to this gallery

Retrieved from "https://halloweenhorrornights.fandom.com/wiki/Universal_Classic_Monster_Mania?oldid=116272"
Community content is available under CC-BY-SA unless otherwise noted.