Universal's New House of Horrors was one of the three haunted houses that was featured during Halloween Horror Nights VI. It was located in Soundstage 22.

Like the previous year, Universal put a haunted house inside Soundstage 22 for their Halloween Horror Nights event in 1996. Soundstage 22 is one of the smaller soundstage facilities designed to be used as filming locations for movies and television shows. This time, the house would be called Universal's New House of Horrors.

Universal would go on to have similar houses to this one until 2001, with the next one being Universal's Museum of Horror in 1997.

Visit this most uncommon wax museum where a lightning strike has had an electrifying effect on two new exhibits, "Universal Classic Monsters" and "Real Life Horrors".

The story of this house was that during the construction of a wax museum, lightning struck the building and brought the wax sculptures from two exhibits to life. The two exhibits were "Universal Classic Monsters" and "Reel Life Horrors".

Like many pre-2000 houses, not much is known about the contents of this house. However, it is known from concept art that one room the guests traveled through was the Borden bedroom, with the mutilated corpses of Lizzie Borden's parents. As the guests left the room, Borden herself would burst out of a closet wielding a bloody axe. A Jack the Ripper room was also featured in the "real life horrors" house. In the real-life monsters side, there were also allegedly appearances from Freddy, Jason, and Michael Myers.

Another room was an ancient Egyptian tomb, with two men uncovering a sarcophagus containing a mummy.

The Classic Monsters side was reportedly the exact same as the one from the previous year. One of the final rooms contained a dipping room, where "guests go to feel what it is like to become a wax statue". 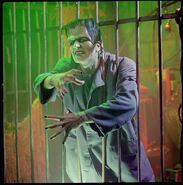 Image from the Halloween Horror Nights: Twenty Years of Fear website.
Add a photo to this gallery
Retrieved from "https://halloweenhorrornights.fandom.com/wiki/Universal%27s_New_House_of_Horrors?oldid=83423"
Community content is available under CC-BY-SA unless otherwise noted.