Universal's Islands of Adventure is a theme park located in Orlando, Florida. It opened in May 1999 as part of an expansion that, along with CityWalk, converted Universal Studios Florida into the Universal Orlando Resort. The park's overall theme is that of a journey of exploration, where guests depart from a main port on an "inland sea" to visit six "islands," each having its own distinct theme, but all emphasizing fun and adventure. A sixth island opened in 2010, which is based on the popular Harry Potter franchise. In 2007, Islands of Adventure hosted approximately 5.3 million guests, ranking it #9 among United States parks and #15 among all parks worldwide.

Islands of Adventure consists of six "islands" plus the Port of Entry, arranged around a lagoon. Various live characters interact with guests throughout the day.

The Port of Entry is the park's main entrance and is home to many shops and services, including Guest Relations. The theme is that of an Arabian bazaar. An attraction information board is located near the shore of the lagoon.

Marvel Super Hero Island has rides inspired by Marvel Comics, and focuses primarily on thrill rides. The island features such Marvel characters as the X-Men, Captain America, Spider-Man, Flik and Hopper, and some villains such as Doctor Doom, M.O.D.O.K., Hobgoblin, and Kingpin.

Toon Lagoon is based on the characters of King Features Syndicate and Jay Ward. The area focuses on water-based rides.

Set in the time of the Jurassic Park movie, the area has some thrilling rides and has discovery-based exhibits. The character of John Hammond even puts in an appearance from time to time.

On May 31, 2007, Universal Orlando announced that it had secured the rights from Warner Bros. and from British author J. K. Rowling, to bring The Wizarding World of Harry Potter to Islands of Adventure.The twenty-acre island features attractions, shops and restaurants set inside such locations as the Forbidden Forest, Hogsmeade Village and the iconic Hogwarts castle. Some existing attractions within the Lost Continent were updated to the new theme. J. K. Rowling revealed in a television interview that one ride will be designed for young children. Ground breaking began in 2007, with completion of the expansion planned for 2010. The new island replaced a portion of the Lost Continent, near the roller coaster Dueling Dragons, while expanding the park into what was a backstage support area and employee parking. It is connected to Universal Studios' Diagon Alley.

This island is themed to ancient myths and legends, and is roughly divided into three smaller sections. The first section is designed to resemble medieval Europe, the second section is ancient Arabia, and the last is mythological Greece. It contains several live-action shows. This land is also home to Mythos, winner of best theme park restaurant several times by Theme Park Insider, and one of two full-service restaurants in the park.

Seuss Landing is specially geared towards small children and is based on the works of author Dr. Seuss. It has several Seuss-themed attractions. One of the unique characteristics of this area is, like in the books, there is not a single straight line anywhere. Palm trees, curved by the winds of Hurricane Andrew, were even installed in the area to continue this theming.

As with almost any amusement park, older attractions are sometimes removed to make way for newer ones. Some will simply close, not to be replaced, while others will be changed from their initial concepts, sometimes significantly.

Poseidon's Fury, Lost Continent's special effects show, originally had a different storyline. In this first version, an old tour guide known as The Keeper wove a tale about the great lost city of Atlantis and an epic battle between Zeus and Poseidon. The Keeper led guests to the Temple of Poseidon, where the evil god appeared and welcomed guests to their new permanent home. The Keeper revealed himself to be Zeus in disguise and, after an effects-laden battle, defeated Poseidon. Based on guest polling data, Universal decided to revise the attraction story. Now, guests meet Taylor, a nerdy archaeologist, who guides them through the attraction, albeit slightly differently. Upon reaching the lost city, the party is captured by Darkanon, a new evil god-like creature. Fortunately, Poseidon, a benevolent god in this version, comes to the guests' rescue thanks to Taylor's assistance and defeats Darkanon. While Poseidon's Fury's plot has changed, its arsenal of special effects has remained intact. The battles use water projection screens, fire and water effects, and high-speed set-changing technology.

In Toon Lagoon, the island's show arena has hosted numerous presentations. Originally, it featured a live show with the various cartoon characters of Toon Lagoon. It was replaced in 2002 by a Mat Hoffman-themed BMX stunt show. It was the home studio of NBC's iVillage Live television show until June 29, 2007.

Originally, Universal creative consultant Steven Spielberg had wanted to make Universal Orlando's second gate entirely Jurassic Park, and would be the same size as Islands of Adventure, but instead featuring only dinosaur and Jurassic Park-themed attractions. Universal agreed to put a Jurassic Park section in the new park as they did but decided to add more themes to the park so as not to limit the second gate to fans of the film franchise only. Seuss Landing was slated to open with 'Sylvester McMonkey McBean's Very Unusual Driving Machines', a track-based aerial ride where guests would drive individual cars around the elevated track. However, it was pushed back due to contractual disputes and safety issues. The bankruptcy of the ride's original manufacturer postponed its opening indefinitely. In 2006, the track was rebuilt in a new format and finally opened as the 'High in the Sky Seuss Trolley Train Ride.' 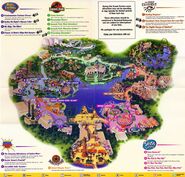 Retrieved from "https://halloweenhorrornights.fandom.com/wiki/Universal%27s_Islands_of_Adventure?oldid=101908"
Community content is available under CC-BY-SA unless otherwise noted.