On August 26th, 2012, Universal announced that a haunted house based on the Universal Classic Monsters would be coming to that years Halloween Horror Nights event. The house would be hastily put together after the venue for another house (Soundstage 44) was demolished to make room for the Transformers Ride. The original house would have been based on the urban legend of the Chupacabra. The house would use the same strobe effects as Dead Exposure from 2008. According to some accounts, the pain was still wet on opening night.

In 2019, another haunted house based on the Universal Classic Monsters would be featured. It would be called Universal Monsters.

This is no remake. No sequel. No re-imagining. These are Universal’s classic monsters of fear, who have terrified audiences from the Silver Screen. They have been waiting within silver celluloid to be resurrected. The flash of a lightning strike cuts the darkness that surrounds, and terror’s true faces take back what is theirs…

These are the original icons of fear in blinding black and white. In here, lightning slashes through the darkness to reveal terror’s true faces. They’ve been waiting to take back what is theirs…and their time is now!

Face the original masters of terror in blinding black and white as lightning slices through the surrounding darkness.

Guests would enter the queue to this house next to the E.T. ride. The queue would go through the queue of the E.T. ride. The line would then go through the Curious George area of the Kidzone, until going down a backstage road towards the Parade Warehouse. Guests would enter the house through a door on the side of the building. Once inside guests would be greeted with a room holding a sign that said "Universal's House of Horrors".

As guests walked in, they found themselves in the middle of a theater lobby Some of the dialogues from a few of the Universal Monsters films could be heard as they walked down the lobby. On both sides, portraits of each Universal Monster represented in the house lined the walls. Guests then entered a film vault where dusty filming cameras and reels were scattered. The howl of The Wolfman could be heard as they entered into the next room. The next scene featured a forest, where guests would encounter the Wolfman. As they made their way out of the room, they saw a circled five pointed star on the wall, the mark of the beast.

After that, guests would go into Count Dracula's castle, where his Brides lunged and screamed at them at every turn. As they tried to find their way into the next room, lightning crashed to reveal a silhouette on the wall of Nosferatu. They then began to walk through hallway of curtains blowing in their direction, while the Brides continued to attack. All of a sudden, Dracula lunged at guests from around a corner.

The next portion of the house had guests ducking down on the ground. Guests found themselves in the lair of The Mummy, who attacked guests on the left. Gill-Man could also be seen above guests. As guests climbed out, they entered into a lagoon-like area where they encountered Gill-Man, who attacked guests. Exiting the lagoon, guests would enter a room and would be startled by a puff of air and the loud sound of an organ playing as The Phantom of the Opera attacked them from the left.

Guests then found themselves walking down a hallway with the sound of electricity growing increasingly louder. Upon entering the next room, guests would be attacked by Frankenstein's Monster, as well as Dr. Frankenstein behind bars on the left. As guests continued down the dark hallway lightning began to crash, and the sound of electricity could still be heard. They would then be immediately attacked by The Bride of Frankenstein on the right, who would also scream at guests. The final of the house featured a room full of film reels hanging down from the ceiling showing scenes from each of the Universal Monsters films. In this room, guests were attacked Dracula on the right, soon followed by Gill-Man and The Phantom of the Opera. Guests would then exit the house. 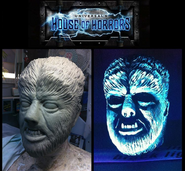 The Bride of Frankenstein

Phantom of the Opera 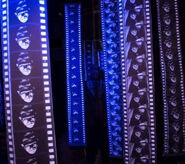 Creature From The Black Lagoon

Dracula Static Figure
Add a photo to this gallery

An Evening With Boris Karloff and His Friends

The Ghost of Frankenstein- Main Title

The Nightmare And Dawn
Add a photo to this gallery

Retrieved from "https://halloweenhorrornights.fandom.com/wiki/Universal%27s_House_of_Horrors_(Orlando_2012)?oldid=107128"
Community content is available under CC-BY-SA unless otherwise noted.