Universal's House of Horror was one of the three haunted houses that was featured during Halloween Horror Nights V. It was located in Soundstage 22.

After its exclusion from the previous year, Universal decided to use the soundstages to hold a haunted house for Halloween Horror Nights in 1995, this time using Soundstage 22. Soundstage 22 is one of the smaller soundstage facilities designed to be used as filming locations for movies and television shows.

This house celebrated the most famous monsters in horror movie history. Reportedly, they used actual movie props from the old Universal Monster movies. This house would be the second known dual house to be featured at the event, with the first being The Boneyard.

Universal would go on to have similar houses to this one until 2001, with the next one being Universal's New House of Horrors in 1996.

Come face-to-face with some of the most famous horror film legends...If you dare!

Monsters who appeared in this house included Frankenstein's Monster, Dracula, The Phantom of the Opera, The Hunchback of Notre Dame, The Wolfman, The Mummy, Dr. Jekyll & Mr. Hyde, and by some accounts Chucky (though this is somewhat unlikely due to the house reportedly only featuring the Classic Monsters). Psycho was in there as well. There were also execution scenes featuring an electric chair and a guillotine. 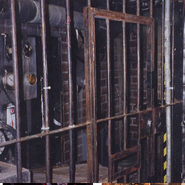 Image from this video.
Add a photo to this gallery

All images from the Halloween Horror Nights: Sweet 16 website page.

Retrieved from "https://halloweenhorrornights.fandom.com/wiki/Universal%27s_House_of_Horror?oldid=80411"
Community content is available under CC-BY-SA unless otherwise noted.