Trick 'r Treat (Scarezone Hollywood) was one of the five scarezones that were featured during Halloween Horror Nights 2018 (Hollywood). It was located in New York Street.

The frightening characters from writer/director Michael Dougherty’s anthology horror film Trick 'R Treat have descended on the small Midwestern town of Warren Ohio during their annual Halloween celebrations. Lurking in the fog are vampires, werewolves, zombie school children and Sam, the vengeful spirit of Halloween who will stop at nothing to ensure his rules for the season are being upheld. 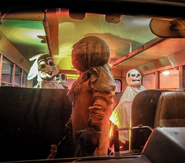 From ushhacker on Instagram
Add a photo to this gallery

Retrieved from "https://halloweenhorrornights.fandom.com/wiki/Trick_%27r_Treat_(Scarezone_Hollywood)?oldid=106801"
Community content is available under CC-BY-SA unless otherwise noted.