"Our next feature at the Universal Palace is...The Wolfman." - The Usher

The Wolfman was one of the eight haunted houses that was featured during Halloween Horror Nights: Ripped from the Silver Screen. It was based on the 2010 remake of The Wolfman, which updates the classic horror story of the title character. The house was the first of the three "Classic Monster Trilogy" houses, the other two being Dracula: Legacy in Blood and Frankenstein: Creation of the Damned. It was located in Soundstage 22.

In 2009, Universal decided to have three haunted houses based on the Universal Classic Monsters, one of which was The Wolfman. This haunted house would be directly based on the 2010 remake of the original Wolfman film. The films release was delayed to after the event, so most guests were not able to see the movie before going through the house.

2009 was the first year Universal decided to give codenames to all of their haunted houses. Some people say the codename was "New", as it was based on the new Wolfman movie while others say that it was "Big Boy".

The house tied in to a story on the Halloween Horror Nights website, Savaged. In it, a rude theater-goer got mauled by a wolf-like creature after throwing popcorn at the screen. The house would be located in Soundstage 22, one of the smaller soundstage facilities designed to be used as filming locations for movies and television shows.

Pure. Animalistic. Rage. Take a journey through England’s countryside and come face to fangs with one of the most terrifying creatures to ever explode from the silver screen. Forget everything you thought you knew, and prepare yourself for the sights and sounds of the newest addition to Universal Pictures’ legacy of horror!

Forget everything you thought you knew, and prepare yourself for the sights and sounds of the newest addition to Universal Pictures’ legacy of horror, straight from the upcoming feature film.

Out of all the gruesome stories of the Universal Palace Theater, the most terrifying one was told by twin girls who had gone on their first visit to the theater with their father.

According to the girls, “a laughing man threw popcorn at the screen" after he claimed horror movies didn't scare him. At that moment, “a big hairy beast with sharp claws and long fangs” went on a rampage inside the theater, killing the man in the process.

The only piece of evidence investigators could find to corroborate with the girls' testimony was the claw marks on the walls.

“Our daddy told us the movies can be very scary,” they each said, “and he was right!"

The House begins in the Gypsy camp, where the wagon trailers have been wrecked and covered in blood splatter. The sound of a beast attacking can be heard from behind the trailers as the old Gypsy woman wanders around with slash marks across her face.

Moving on, the guests enter the woods on the moors, where they are attacked by a werewolf as a hunter tries to shoot it with a rifle.

The beast will attack again at several points throughout the scene, and guests will find an injured villager from Blackmoor lying against a tree, bloodied and sporting a large bite wound.  From the woods, guests enter the Tavern, where the chained-up windows bang and rattle as something outside tries to break in.  An injured barmaid runs in from a back room screaming as the Wolfman pursues her.

From the Tavern, guests enter the ice-house which has been converted into a makeshift morgue, where the slashed-up victims of the beast are being examined by a rather confrontational Detective Abberline.  On the last slab is a survivor being treated: Lawrence Talbot, who suddenly awakens as guests walk by and snarls at them in a beast-like way.  From there, the guests enter the insane asylum, where inmates pop out of their rooms to frighten passers-by.

The next room is the examination room of the Asylum, with Lawrence strapped down to a chair and surrounded on three sides by screens, forced to watch the moon-rise as part of his "treatment" for his "delusions".  As the full moon rises in the opposite-side windows, Lawrence shouts for the guests to flee, threatening to kill them all as he begins convulsing, and his hands start to transform.   As guest pass by the screen on his left, it is suddenly slashed open as the fully-transformed Wolfman lunges out at guests.

From there, guests enter the Talbot mausoleum, where they are startled by Lawrence, covered in blood and torn cloths (sometimes it´ll also be the Feral Boy depending on the cast), and Lawrence's rather eccentric and sinister father, Sir John Talbot.  Exiting the tomb, Guest enter a trench out on the moors, while above them the Wolfman stalks them.

They emerge in a clearing in the woods, where the Wolfman jumps out and lads on a large boulder in the center, howling at the moon.  A hunter armed with silver bullets suddenly emerges from the woods and fires at the beast, knocking it back.  As guests head for the exit of the maze, the Wolfman will lunge out for one final scare.

Images are from the Halloween Horror Nights: Ripped from the Silver Screen website until otherwise noted.

Photo from the owner of HorrorNightsCollector. 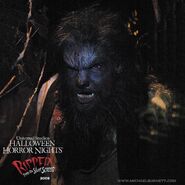 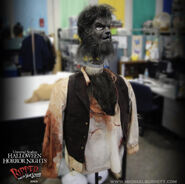 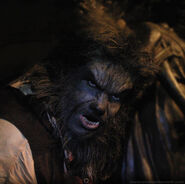 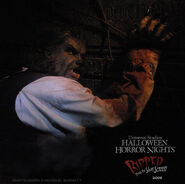 Retrieved from "https://halloweenhorrornights.fandom.com/wiki/The_Wolfman_(Haunted_House)?oldid=112010"
Community content is available under CC-BY-SA unless otherwise noted.