The Walking Dead was a house during Halloween Horror Nights 26. It was located in Soundstage 24 along with Ghost Town: The Curse of Lightning Gulch and was based of seasons 1-6 of The Walking Dead.

On June 6th, 2016, Universal announced that a fifth and final haunted house based on The Walking Dead TV show would be coming to their Halloween Horror Nights event that year. The house would feature scenes from the first six seasons of The Walking Dead. The codename for this house was "Uncle" as the Art and Design department cried Uncle when they were pressured to have another Walking Dead house.

The house would be one of two located in Soundstage 24, the other one being Ghost Town: The Curse of Lightning Gulch. Soundstage 24 is one of the larger soundstage facilities designed to be used as filming locations for movies and television shows. This would ultimately end up being the final Walking Dead house at the event.

Face relentless threats starting from the beginning of the series to the last season's most unforgettable moments.

The facade was the groups campsite outside of Atlanta where you see a man getting eaten inside of a tent and the R.V. 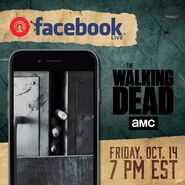 Retrieved from "https://halloweenhorrornights.fandom.com/wiki/The_Walking_Dead_(2016)?oldid=117541"
Community content is available under CC-BY-SA unless otherwise noted.