The Walking Dead: No Safe Haven (Hollywood) was one of the six haunted mazes that was featured during Halloween Horror Nights 2013 (Hollywood). It was located in the Metro Sets.

Follow in the footsteps of the survivors as you journey through the shadowy confines of the West Georgia Correctional Facility. Seemingly abandoned, this prison has been breached by Walkers with an insatiable hunger for human flesh! Then, if you're still alive, make your way into the Walker-infested wilderness that surrounds the prison and into the town of Woodbury, where The Governor is hiding a terrible secret. In a world that belongs to the dead…there is no safe haven. 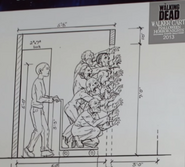 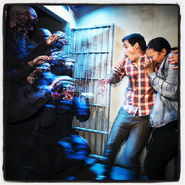 AMC's The Walking Dead is back at Halloween Horror Nights 2013

Walking Dead- No Safe Haven (Front Facade Soundtrack)
Add a photo to this gallery
Retrieved from "https://halloweenhorrornights.fandom.com/wiki/The_Walking_Dead:_No_Safe_Haven_(Hollywood)?oldid=108831"
Community content is available under CC-BY-SA unless otherwise noted.