The Walking Dead: Dead Inside was one of the seven haunted houses that were featured during Halloween Horror Nights 22. A house of the same name was at Halloween Horror Nights Hollywood 2012. It was based on the comic book series and the AMC television series (Seasons 1 and 2) of the same name. It is also considered to be the "icon house" for the event. It was located in the Disaster! Queue.

On July 18th, 2012, Universal announced that a haunted house based on the hit T.V. show The Walking Dead would come to their Halloween Horror Nights event that year. The house would feature scenes from the first two seasons of the show.

The house would be located in the large extended queue for the Disaster attraction. The following year, Universal would make a house based on season 3 of The Walking Dead T.V. show titled, The Walking Dead: No Safe Haven.

There is strength in numbers, and you must band together to make it through many of the iconic settings made famous by the critically-acclaimed AMC television series, “The Walking Dead.” As the city is crawling with hordes of walkers, the issue of your becoming one of them is not a question of if, but when.

Band together as you escape infection and face hordes of walkers from AMC's hit The Walking Dead. There's no way out.

Guests would enter the queue of this house to the left of the entrance for Beetlejuice's Graveyard Revue. The queue would go to a backstage area behind the Disaster building, where the line would loop around multiple times before entering the Disaster building from the back.

As guests reach the end of the queue, they would be able to see a large truck and many wrapped corpses scattered everywhere. Guests would enter the house through the entrance of the Harrison Memorial Hospital. 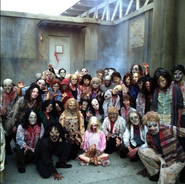 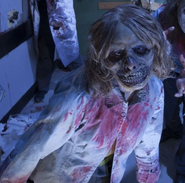 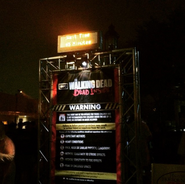 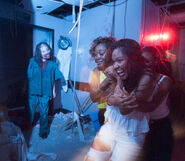 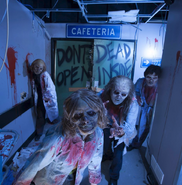 From HHNCrypt
Add a photo to this gallery

Retrieved from "https://halloweenhorrornights.fandom.com/wiki/The_Walking_Dead:_Dead_Inside_(Orlando)?oldid=117534"
Community content is available under CC-BY-SA unless otherwise noted.