Julian Browning was an usher at the Universal Palace Theater, a popular movie house that had been converted from a playhouse during the 1920s. Browning truly enjoyed working at the theater and loved the movies, especially horror movies, becoming something of an expert. However, Browning was also very strict about enforcing the rules, and hated rude patrons who disrupted the movie experience for others. During a 1940 re-release of his all-time favorite horror film, The Phantom of the Opera starring Lon Chaney Sr., Browning engaged in a scuffle with a rude theatergoer. During the fight, Browning's flashlight was seized by the boorish patron, who tossed it through the new screen, tearing it. As the furious usher went backstage to retrieve it, he was somehow entangled in one of the old playhouse's sandbag's ropes, causing him to die a slow, painful death of strangulation with his feet mere inches above the floor. It was revealed that this was the first horrible event of many in the theater's history, meaning that either the Universal Palace itself is evil, or Julian's "revenge" has been to destroy other rulebreaking patrons with classic movie monsters (almost in the same way the Phantom from The Phantom of the Opera would do by causing incidents in the opera house).

Julian Browning is the last of Fear's Heralds, embodying Vengeance through his violent punishments of rule-breakers.

"Vengeance is depicted showing one individual bludgeoning another with an object. This object is always seen with light emanating from it." - Excerpt from Demons Among Us: Uncovering Evil

The Usher did not appear on event merchandise or advertisements (although his beloved theater was a setting for one), but he did show up for television interviews. He also appeared on the HHN website, including the website intro. The intro would later be played on the screen at the entrance to the event as an extended version with additional clip footage from horror movies and split-second shots of The Usher mimicking his own strangulation.

At the Event Edit

The Usher appeared in the Silver Screams house at the event and could be seen in videos screened on the walls around the queue areas and at the entrance, introducing the scarezones and houses, as well as a skit about the Palace Theater rules. He also appeared at the entrance of the park around the ticket area, along with female counterparts. He also appeared at the 2010 event with all the other icons. In 2015, he reappeared alongside his fellow icons as one of Jack the Clown's maniacs.

The Usher on a promotional image for Halloween Horror Nights: Ripped from the Silver Screen. 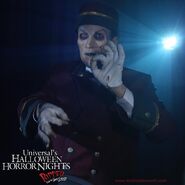 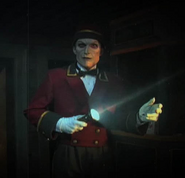 The Usher with Jack the Clown. 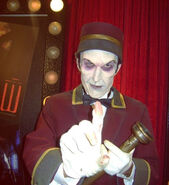 Photo of The Usher displayed at the Unmasking the Horror Tour. 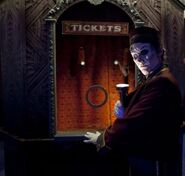 Retrieved from "https://halloweenhorrornights.fandom.com/wiki/The_Usher?oldid=86353"
Community content is available under CC-BY-SA unless otherwise noted.