The Thing was one of the eight haunted houses that were featured during Halloween Horror Nights 21. It was based on the 2011 movie of the same name. Variety Magazine claimed the house would be one of the most immersive movie houses ever done at the event. The house was located in Soundstage 23 along with Nightingales: Blood Prey.

In 2011, Universal decided to build a haunted house based on the 2011 prequel movie of The Thing. The prequel was also called The Thing, and it took place in a Norwegian research base in Antarctica. The house would be the only IP house in 2011, and would feature many of the important scenes from the movie.

In 2011, every house tied into a story relating to a choice a character had to make (influenced by Lady Luck). This house's story was focused on Juliette (one of the characters from the movie), had the choice of going to the base, where the events of the movie would occur, or turning back. She chose to go to the base, and soon got assimilated by The Thing. Lady Luck took the form of an air traffic control worker telling Juliette of her choices.

The house would be one of two located in Soundstage 23, the other one being Nightingales: Blood Prey. Soundstage 23 is one of the larger soundstage facilities designed to be used as filming locations for movies and television shows. These two houses would be the last two to be featured in this location.

Inspired by the new thriller, paranoia spreads like an epidemic among a group of researchers in an isolated Antarctic outpost as they are infected, one by one, by a horrifying creature from another planet. In a place where there is nothing, they found something.

Inspired by the new thriller, paranoia spreads like an epidemic among a group of Antarctic researchers as they encounter a creature that has the ability to turn itself into an exact replica of any living being.

Guests would enter the queue across from the New York Public Library. The queue would go towards Soundstage 23, where guests entered the house. Guests enter to find themselves in the middle of falling snow as they approach Thule Station, the Norwegian research station in Antarctica.

Entering through a damaged doorway, you enter into the rec center. The lights have gone dark, apparently due to power loss, and as you pass by the pool table Jonas appears with a small Thing attached to his face, being to assimilate him. Carter appears from behind the bar, his flamethrower sparking as he attempts to get it to work. Passing into the next hallway, strobes flash as an animatronic four-legged fusion of Edvard and Adam bursts through a hole in the wall.

One of the small Things, apparently grown from an infected arm, has been pinned to the wall with an axe. An infected Juliette attacks from another room. Through another hole in the wall, Henrik is seen being impaled by a harpoon-like tendril and pulled into the wall away from the line.

Entering the laboratory, the burned Thing that had been discovered in the ice is lying on the table, Henrik's corpse staring out from its autopsied belly. A Jonas-thing appears from a side room and another from behind a filing cabinet, and the Thing on the table heaves.

The kitchen seems unoccupied until a Griggs-thing bursts through the double doors. Strobes flash as Kate appears from her hiding place among the shelves and fires a pistol at it, driving it back.

In the radio room, Juliette appears from behind a wall to attack. Colin, unable to handle the stress, slits his throat and sprays blood on the guests. Continuing into the storeroom, a partially-transformed Edvard-Adam-thing leaps between the shelves and leans down to swipe at the line below him.

In the storage room where the original Thing was held, it's broken from its block of ice and clings to the ceiling as Derek fires a shotgun at it. A Griggs-thing is hidden behind some barrels on the other side of the room.

Passing through a short hallway that smells of oil, you find yourself entering the inside of the crashed UFO that brought the monster to Earth. The Sanders Thing attacks from a small alcove as Carter attempts to use his flamethrower on it, and the infected Juliette appears for one final scare. 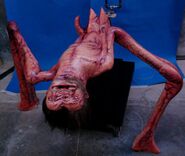 Retrieved from "https://halloweenhorrornights.fandom.com/wiki/The_Thing_(2011)?oldid=112122"
Community content is available under CC-BY-SA unless otherwise noted.