The Thing: Assimilation was one of the eight haunted houses that was featured duringHalloween Horror Nights: Carnival of Carnage. It was located in Sprung Tent 1. The haunted house was also an unofficial sequel to the 1982 film, The Thing.

A haunted house based on the original Thing movie was planned to appear at Halloween Horror Nights: Islands of Fear. However, this house idea was scrapped. The idea of a Thing house would return in 2007 with The Thing: Assimilation. This house would be an unofficial sequel to the Thing movie from 1982. The story of the house was created by Universal.

The house was one of the first haunted houses to feature the use of primarily animatronics and puppets.

In 2011, a haunted house based on The Thing prequel was built.

A secret facility in Florida studying the Bio-hazardous remains of Arctic outpost 31 accidentally unleashes someTHING.

On the carnival page, guests could click on a truck with the label "What Is It?" to see a locked door and a keypad. Guests would have to enter the correct code in the keypad in order to open the door and see a secret preview video for the house. The answer would be on a floppy disk in Jack's bus. Clicking on it would show a computer, which would type out various messages. At the end, it will show an error code number (3113), which was the answer to the puzzle. In Jack's bus, guests could also click on a radio to hear a short audio clip. Finally, guests could also see a white queen, a black bishop, and Outpost 31, Antarctica circled on a map in Jack's bus.

Images from the Halloween Horror Nights: Carnival of Carnage website until otherwise noted.

Image from the now defunct horrornights.be.

The floppy disk that held the solution to the puzzle. Image from the now defunct horrornights.be.

The solution to the puzzle. Image from the now defunct horrornights.be. 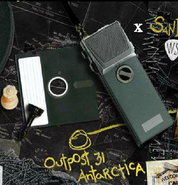 HHN 17- "The Thing- Assimilation" House Preview
Video that played when the carnival puzzle was solved.
Add a photo to this gallery

Music that played on the Backstory Page and in Jack's bus when the floppy disk was clicked on: Main Theme (From The Thing)

Audio that played on the Backstory page when the Blood Sample was clicked on:

Audio that played on the Backstory page when the first Computer Screen was clicked on:

Audio that played on the Backstory page when the second Computer Screen was clicked on:

Audio that played on the Backstory page when you hover over a message on the second Computer Screen with your mouse:

Audio that played on the Backstory page when you clicked on a message on the second Computer Screen:

Audio that played on the Carnival page when guests clicked on the first or third number for the code:

Audio that played on the Carnival page when guests clicked on the second or fourth number for the code:

Audio that played on the Carnival page when guests entered the incorrect code:

Audio that played on the Carnival page when guests entered the correct code:

Audio that played in Jack's bus when the radio was clicked on:

As guests approached Sprung Tent 1, they would see a fence with a sign that said "United States Government Air Force. Bio-Research Facility. Outpost 3113. Warning Restricted Area. Unauthorized Prescence Considered a Breach of Security. Use of Deadly Force Authorized. AUTHORITY: Internal Security ACT 50. USC 797."Guests passed by a large Unimog truck and entered through a long plastic tunnel that connected the outside world to the sterile environment of the labs. Immediately, the blare of the alarm and flashing lights indicated that all was not well.

As guests passed through the entryway, they were startled by a soldier armed with a shotgun suddenly bursting from his hiding place in a locker in the security office. The soldier attempted to communicate the danger in the labs through the intercom on the other side of the plexiglass window, but was distracted by something in the hallway behind him. He fired his shotgun at the mysterious creature behind the wall, only for an unseen force to pull him back out of sight.

Guests passed by the frozen bodies of MacReady and Childs and entered an autopsy lab. The body on the table has burst open, and a massive multi-tentacled organic mass has stretched from its chest and is beginning to spread across the ceiling. As the body and tentacles twitch and shake, a soldier appears from an alcove and begins firing his assault rifle at it.

Guests passed by several doors, which opened to reveal scientists begging for help before being pulled back by tentacles. Passing through another plastic tunnel connecting the labs to the rest of the base, mutated Thing dogs began to push their heads through tears in the plastic and bite at the guests.

In the storage room, a spider-head clung to the fence as an infected scientist reached for the guests. A body pinned to the fence that divided the room in half had a Venus Flytrap-esque growth emerging from its chest, which shook and hissed as guests walked by.

The rec room seemed empty except for the lone soldier, armed with a pool cue from the nearby table and barricading himself with the vending machine. Suddenly, strobes flashed and a massive Thing with a dog's head growing from its chest appeared from a dark corner.

In the larger warehouse, the UFO from Outpost 13 was seen hanging from the ceiling, along with a taller humanoid thing perched on a crate. A soldier appeared from behind a stack of crates and fired at it over the guests' heads. Guests entered a kennel, where the growling and barking of scared dogs could be heard.

In the final room, a gigantic Thing had taken over the entire back wall, tentacles and limbs emerging from the mass of flesh. As guests exited, a loud air horn sounded and air blew at the exit door. 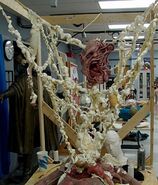 The Layout for The Thing: Assimilation.

Picture from disneyfan1313 on the TPR Forum

The Thing - Main Theme
Add a photo to this gallery

Retrieved from "https://halloweenhorrornights.fandom.com/wiki/The_Thing:_Assimilation_(2007)?oldid=108014"
Community content is available under CC-BY-SA unless otherwise noted.