"Up next on our midnight marquee is a creature feature from the bowels of the dark. The Spawning." - The Usher

The Spawning was one of the eight haunted houses that was featured during Halloween Horror Nights: Ripped from the Silver Screen. It was located in Sprung Tent 2.

In 2009, Universal decided to build two original haunted houses produced by the Fangoria magazine. One of these two houses was The Spawning. The story of the house is that underneath the sewers of Carey, Ohio, are reptilian creatures called Sculders.

2009 was the first year Universal decided to give codenames to all of their haunted houses. Some people say the codename was "Magazine", as it was sponsered by Fangoria, while other say it was "Civic Duty".

The house tied in to a story on the Halloween Horror Nights website, Missing. In it, three rude theater-goers got kidnapped by The Sculders and their clothes were found in the sewers. In 2006, Universal built two hurricane-proof tents behind the World Expo area of the park specifically for holding Halloween Horror Nights haunted houses. This house would be located in the northernmost one (called Sprung Tent 2).

Something “different” has moved in among the sewers of Wyandot County, Ohio. The locals claim that these creatures, the “Sculders”, are two feet tall, with the body of a snake. As a volunteer member of the local water district, it is your civic duty to venture into these pipes and restore the flow. But beware, the locals are wrong about the “Sculders” and the only thing that will be flowing is your blood as it leaves your lifeless body.

Something “different” has moved in among the sewers, and it's your job to venture into these pipes and restore the water flow. Beware what lies beneath...

During the final screening of a particular film, a gang of rowdy teenage boys would visit the Universal Palace Theater. Three in particular would get into trouble with the staff after disrupting screenings with vulgar language and horseplay. Eventually, they were banned from the premises.

On the night of their senior prom, the three boys snuck their way back into the theater via the emergency exit door. And that was the last time anyone ever saw them.

Reaching the front of the house, guests would enter the tent through the entrance building of the "Wyandot County, OH Water Department".

Throughout the house, guests walked through an extremely dark sewer which did not have an light. In the first room, they passed through the shut down office area for the water department and then walked through the sewers and were attacked by sculders, slimy grey creatures who had stopped Wyandot County's water supply and were feasting on humans. On the desk, you can see a spilled bottle of Sleepwell. In the house, guests could also feel dirty sewer water dripping onto them, and passed through a hallway with flashing lights. 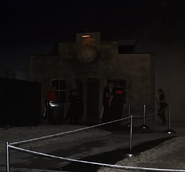 The Spawning facade Credit to: Michele

From Dick Johnson
Add a photo to this gallery

Retrieved from "https://halloweenhorrornights.fandom.com/wiki/The_Spawning?oldid=120347"
Community content is available under CC-BY-SA unless otherwise noted.