The Slaughterhouse was one of the three haunted houses that was featured during Halloween Horror Nights III. It was located in Nazarman's.

In 1993, Universal Orlando decided to make a very gory house for their Halloween Horror Nights event that year. They built the house behind a few of the building facades in the New York area of the park. The most notable facade was the outside of a pawn shop called Nazarman's. Universal built structures and alleys behind these facades to hold haunted houses. The house would feature a packing and processing facility for human meat.

A similar idea would be used the following year during the Halloween Horror Nights IV haunted house Hell's Kitchen. However, instead of being in a slaughterhouse that house was set in a kitchen. However the same themes of cannibalism and gore were reused for Hell's Kitchen.

Blood soaked house of horror - Not for the squeamish.

Face a host of frightening mutants and maniacs as you race through The Slaughterhouse- a new nerve-shattering flight through the back alleys of New York City.

Guests would enter the queue in Delancey Street, one of the alleyways in the New York area of the park which holds the Blues Brothers show. Outside of the entrance to the house hung a sign which showed a meat cleaver and the words "The Slaughterhouse" written in what is presumably blood.

The house featured many mutants and monsters who invaded the titular slaughterhouse and turned it into a human meat processing facility. It consisted of a vacant warehouse with rooms covered in blood, sometimes from floor to ceiling. It also had evil butchers and corpses hanging like meat in a slaughterhouse. Allegedly, despite going for gore this house was not as gory as the other two. 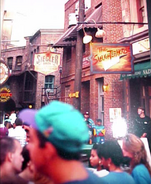 The facade from The Slaughterhouse. Image from this video.
Add a photo to this gallery 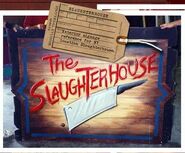 Retrieved from "https://halloweenhorrornights.fandom.com/wiki/The_Slaughterhouse?oldid=83204"
Community content is available under CC-BY-SA unless otherwise noted.