The Skool was one of the seven haunted houses that was featured during Halloween Horror Nights: Tales of Terror. It was located in Thunderfalls Terrace.

For their 2005 event, Universal created their own demented country that runs on blood and sacrifice. One of the houses they chose to have at the event was a house based on the school of this country. The house would be called The Skool. Here, the children of The Body Collectors, Ore Mongers and other demons of Terra Cruentus learn the ways of the land, and the ways of the Terra Queen. It is also where they play the game "Dead Man's Wishes", a twisted and fatal version of hide and seek.

After not being used the previous year, the Thunderfalls Terrace restaurant would be used again in 2005 to hold this haunted house. Thunderfalls Terrace is restaurant located in the Jurassic Park area of Islands of Adventure (although guests entered the house through Toon Lagoon). The restaurant was closed and cleared out to make room for the house. This would be the final year the building was used to hold a house, as the Halloween Horror Nights event moved from Islands of Adventure to Universal Studios Orlando.

The house would get a semi-sequel scarezone in 2008 titled The Skoolhouse.

The children have taken over the school and found horrifying new ways to celebrate Halloween. That's not a jack-o-lantern they're carving…

The children of the Collectors, the children of the Mongers and the rest of the children of Terra Cruentas celebrate The Season of the Queen in their own very twisted manner. It's dress-up time at The Skool in Gorewood Forest and mankind turn out to be their "treats", tricked in the worst, weird, and wicked ways.

Located right inside the entrance to Gorewood Forest, The Skool is where the children of the various races living in Terra Cruentus learn the ways of the land and how to properly obey and worship the Terra Queen. One of their favorite activities is the game of Dead Man's Wishes, a form of hide-and-seek that has the players trick people before killing them. Occasionally, the students of the Skool would overpower the teachers and take over the facility. The skoolchildren would recite the "Pledge Allegiance to the Queen" every day, and would partake in activities such as Foul Feast Friday, Visitor Burials, and Last Picnics.

On the map of Terra Cruentus found on the Halloween Horror Nights: Tales of Terror website, visitors could click on and view the Gorewood Forest region of the map. There, they could access the website page for The Skool by clicking on a bell. The page showed a teacher's desk in a classroom. Visitors could click on a bell to hear a bell toll and a scream, a calendar to view when certain events were happening in The Skool, and a picture showing the class. Guests could click on three of the students in the photo to hear short audio clips from the children. Finally, guests could click on a gramophone record to hear the children's "Pledge Allegiance to the Queen". 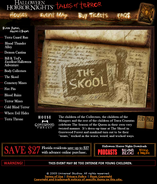 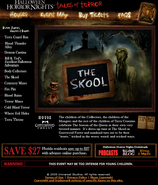 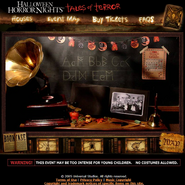 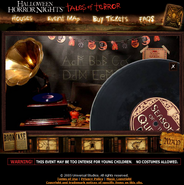 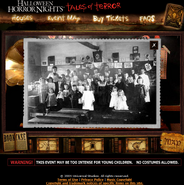 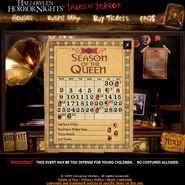 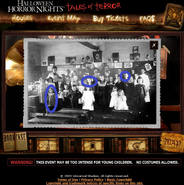 The Skool photo with the clickable girls highlighted.
Add a photo to this gallery

Song that played on the Website Page: Secret Chamber by Midnight Syndicate

Audio that played when the bell was clicked on in the Backstory Page:

Audio that played when the girl on the bottom left was clicked on in the photo on the Backstory Page:

Audio that played when the girl in the middle was clicked on in the photo on the Backstory Page:

Audio that played when the boy on the right was clicked on in the photo on the Backstory Page:

Audio that played when the record was clicked on in the Backstory Page:

Guests would enter the queue right outside of the entrance to Jurassic Park. The queue would wrap around the backlot area of the park in between the Dudley Do-Right ride and Thunderfalls Terrace. A large video screen was erected there to play the queue video, which consisted of various scenes of children murdering people. Guests would enter this house through Thunderfalls Terrace, which had a facade of a playground with a swing-set outside.

Guests would traverse through various classrooms in this school with various children attacking guests and teachers. Some of the students wore animal masks. Dead teachers were featured in this house, including one hanging, and one tied to a chair.

Retrieved from "https://halloweenhorrornights.fandom.com/wiki/The_Skool?oldid=92118"
Community content is available under CC-BY-SA unless otherwise noted.