The Repository was an additional payment haunted house that appeared during Halloween Horror Nights 26. It was located in Soundstage 19 along with American Horror Story and was a Virtual Reality house.

On August 12th, 2016, Universal announced that an upcharge house (costing $49.99 per person) would be coming to their Halloween Horror Nights event that year. The house would be more like an escape room rather than a house.

The house would be one of two located in Soundstage 19, the other one being American Horror Story. Soundstage 19 is one of the larger soundstage facilities designed to be used as filming locations for movies and television shows. These two houses were the first (and last) houses in this location. This would end up being the only upcharge house in the history of the event.

The Repository is a new generation of psychological horror and taking you into a world cutting edge technology.

Guests would enter at the VIP entrance marked by a large gargoyle at the entrance. Once done checking in they would be paired with their group and would be called when it was their turn. The waiting area featured several signs on display referencing various haunted objects the repository had acquired over the years. Various TVs placed around the room would display the repository logo and occasionally show someone in a suit who would brief you on the mission.

Once called you would enter a very dimly lit room with a large table in the center and two shelves on either side of the room. The table was covered with various items some of which were referenced in the waiting area. The curator would explain that you had to break the curse as he had been unable to leave for a multitude of years and the facility was in danger. A guard would escort you out of the room and leave you in a small hallway filled with boxes an escaped mental patient (supposedly drive mad by the experiments required to break the curse) would appear and lead you into a room with hundreds of keys on the floors and and tables and numbers scrawled on the walls . The patient would then bet that you couldn't find his special key as it was in a safe place. A safe could be discovered covered in keys on the floor and the combination was hidden on the wall. Whether or not guest could open the safe they would be given an item from the safe and guards would emerge and pull you into the next room.

The next room featured a laboratory with a scientist and a soldier who was exhausted in a chair in very bad shape. The scientist would show you various objects and tell you you were about to enter another realm and to remember everything you saw. At one point the soldier would lunge at the group and the scientist would use a large cattle prod to subdue them as guest were escorted into the next area.

The next area would feature the group of 4 broken into groups of two each entering an identical room that featured the only actual part of the haunt that involved actual virtual reality headsets. After lab techs assisted with putting on the headsets guest would then be handed a scepter which appeared to be a skeletal arm to search for clues. The vr segment featured randomly changing scenes including a graveyard where red eyed hooded figures would beckon and a platform that slowly fell to pieces over an abyss and was then swarmed by a murder of crows (during this scene the lab techs maneuvering around the guest would brush feathers against their face) during all the various scenes the skeletal staffs could be used to find various symbols hidden throughout the environment.

The headsets would be removed and the guest would be ushered into a dark room with a shrine and various glowing cubes. The guest would then be timed to match the correct cube with the correct symbol. Placing the cubes would result in a stream of light that would slowly travel up the wall and change color based on whether or not it was in the correct position. Placing the cubes in incorrect positions would result in various scare effects such as smoke machines and flickering lights.

Guest who succeeded or failed were rewarded with a sticker featuring the logo of the organization the color of the sticker depending whether or not they had succeeded. 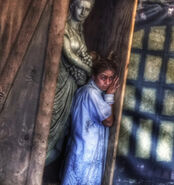 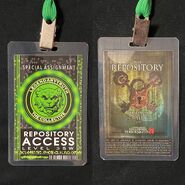 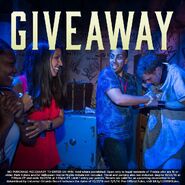 Retrieved from "https://halloweenhorrornights.fandom.com/wiki/The_Repository?oldid=114207"
Community content is available under CC-BY-SA unless otherwise noted.