In 1993, Universal Studios Florida decided to make a Psycho house for their Hallloween Horror Nights event that year, so they built a tent behind the Bates Motel facade that they had in the World Expo area of the park. The facade was a recreation of the famous Bates Motel and the Bates House (which was up on a hill). The house would use actual props from the movie Psycho IV: The Beginning, and would take guests through famous scenes from the Psycho franchise.

This house was so popular that they decided to bring it back the following year in 1994. This incarnation of the house had most of the popular rooms from the 1993 house, as well as several added scenes. These two houses would be the only ones located in The Bates Motel, as the facade was destroyed in the mid 1990s to make room for Woody Woodpecker's Kidzone.

The house would get a sequel in 1999 titled Psycho: Through the Mind of Norman Bates, in which guests are transported into Norman's crazed mind as he is confined in the Fairvayle Sanitarium.

A maniacal maze - Check into the Bates Motel if you dare!

Check into the Bates Motel and venture down the Psycho Path, if you dare. This new maze of madness fuels your deepest fears as you are chased by Mother Bates further and further into the darkness.

At the Bates Motel you can check in, Mother Bates will check you out!

The 1994 version of the house included several new scenes, including graveyard and an attic.

All images from the Halloween Horror Nights: Sweet 16 website page until otherwise noted. 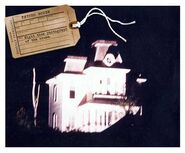 The layout of the Psychopath Maze with notes from The Director.

The closet scene with notes from The Director.

Retrieved from "https://halloweenhorrornights.fandom.com/wiki/The_Psycho_Path_Maze?oldid=92026"
Community content is available under CC-BY-SA unless otherwise noted.