The Mummy was one of the five haunted houses that were featured during Halloween Horror Nights IX. It was located in the Earthquake Queue along with Doomsday. The house was based on the 1999 movie of the same name and was considered to be the icon house during that year.

In 1999, a semi-remake of The Mummy came out in theaters. The movie proved to be a success, and so Universal decided to build a haunted house based off of the film during Halloween Horror Nights IX. The house would be one of two haunted houses located in the extended queue of the Earthquake attraction that year, the other being Doomsday.

Navigate the depths of a mysterious Egyptian tomb and face ancient priests who want to make you a permanent resident.

The first scene was a corridor with statues of mummy warriors wielding sickles. Some of the warriors came to life, scaring guests. Then, Rick O'Connell jumped out of an alcove warning guests to get out. Afterwards, guests saw some diggers trying to open a door, but instead releasing acidic sands. This scene distracted guests from a warrior mummy scare. Guests then moved into Imhotep's sacrificial chamber, and saw mummy priests tearing out the tongues of unlucky excavators. Next, the guests saw a group of unlucky mummified tourists, just like them. Finally, Imhotep jumped out of a sarcophagus for a final scare.

Besides this description, concept art also shows an Embalming Room filled with bleeding corpses and a scareactor portraying a priest of Anubis in the process of removing one corpse's internal organs.

Confirmed scenes in this house included one with beetles (possibly on the floor), torture scenes, dog-faced warriors, and a live mummification. 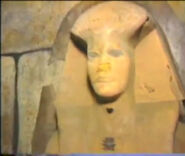 Image from Attractions Magazine.
Add a photo to this gallery

Both images from the Halloween Horror Nights: Sweet 16 website page until otherwise noted.

Retrieved from "https://halloweenhorrornights.fandom.com/wiki/The_Mummy_(Orlando)?oldid=113098"
Community content is available under CC-BY-SA unless otherwise noted.