The Lantern was the main prop for Halloween Horror Nights: Twenty Years of Fear. It was an oil lantern with two X's, and it was covered in overgrown vines.

On July 27th, 2010 on the Halloween Horror Nights website, the lantern would reveal flames in the shape of past icons, and bring you to a photo gallery. On the Legendary Truth website, a conversation between a former member of the Collective and a disgruntled employee at Universal reveal The Lantern is somehow evil. Strangely, on the website, more faces appeared in the fire inside the lantern including: Billy, Nightmare, and The Gentlemen.

Apparently, the Lantern has been in the Art & Design department since at least 1990. Sometime after 9:00 p.m. on August 24, 2010, strange occurrences began happening around The Lantern, including cold spots, strange noises, and bizarre lights, prompting a full evacuation before the building suffered a total blackout. This way, Legendary Truth was able to snatch The Lantern before electricity was restored. The team did a special forensic scanning, and found nothing special. The team isn't giving up though....

As of October 2, Fear has been seen holding the lantern in Fear Revealed. This may mean, The Collective has lost the Lantern, but that is currently unknown. Defending this theory, the research section of the website (specifically the Lantern case) has gone offline.

In 2015, a Legendary Truth investigation hints that Bloody Mary may have had a hand in releasing the Heralds of Fear from the Lantern. 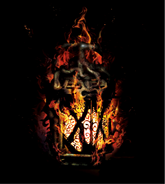 Retrieved from "https://halloweenhorrornights.fandom.com/wiki/The_Lantern?oldid=108640"
Community content is available under CC-BY-SA unless otherwise noted.