In 2011, Universal decided to have another haunted house that used 3-D glasses The house would be called The In-Between, and would take guests to an alternate dimension filled with all kinds of demons.

In 2011, every house tied into a story relating to a choice a character had to make (influenced by Lady Luck). This house's story was focused on Louis and Bubba, two college students. Louis stole a board game from his teacher (Lady Luck in disguise) who proceeded to warn him that if he played with it, bad things would happen. He and Bubba played with it anyway, and were transported to a hellish environment.

This house would prove to be very popular, and would even go on to co-win the House of the Year award in 2011 with The Forsaken. Its popularity would also bring the return of a 3-D house the following year with Penn & Teller: New(kd) Vegas.

An ominous portal reveals a 3rd dimension where all is not what it seems: a realm where our world and another collide. Surrounded by fiendish creatures, your eyes will deceive you with every step through this phantasm of terror.

An ominous portal reveals a 3rd dimension where fiendish creatures collide with our world in a phantasm of terror.

Louis is an A-grade college student and an honors student in his professor's (actually Lady Luck) class. One Saturday night, Louis decides to ditch studying in his dorm and instead uses his key to his professor's file cabinet to steal a cursed Ancient Runes game. The professor soon finds the game missing and leaves a message on Louis' cell phone, warning him that the game is more then an archaeological piece and that it has dark powers and if it is not returned, Louis' choice will result in consequences beyond his control.

Louis ignores the message and begins playing the game with his slacker friend Bubba and their friends in his college dorm room, however, the game then opens up a portal to an evil realm known as "the In-Between", unleashing numerous demons from the realm into our world, who drag Louis and Bubba through the portal and into the In-Between.

Some time later, the boys were forced out of the demon world, which results in a fire that ignites the whole college dorm, and Louis and Bubba are the only casualties, having been killed by third degree burns and smoke. The board game is never found; like it has vanished without a trace. Following the incident, Louis' dorm is condemned by the Police Department and is to never be entered again.

At the end of the queue right outside the house, guests are given a pair of 3D glasses. They then enter through the giant cover of a comic book called "THE IN-BETWEEN", which depicts Louis being sucked into the portal from his dorm room.

The first room in the house is a college dorm room that has been ransacked and covered in glowing symbols. They pass through a large tunnel covered in runes and the faces of Louis and Bubba, and find themselves in the alternate dimension. Demonic heads (hanging from nearly invisible black ropes) bounce and sway around the line, the 3D glasses working with the three-dimensional objects to make them appear to shimmer and blur as they move. A pair of winged demons, glowing veins lining their bodies, appear from nowhere to attack the line as more floating heads hang from above.

A set of slanted walls, painted in a grid pattern, provide hiding places for demons with the same pattern. Another demon rolls around on a net above the line, reaching through at the guests.

In the next room, lasers fill the entire space, reflecting off and refracting through the nearly invisible glass walls that form the guest path. Almost invisible black string hanging from above gives the impression of the lasers pricking at your flesh. Several demons hide among the laser projectors.

The next room is lined with technicolor ropes, almost like massive spider webs, and the cloudy glass floor reflects the webs, giving the impression that you're walking on thin fog with the webs descending deep below you. Cat-like demons hiss and spit through the webs.

The next hallway and room are covered with runes of various shapes and sizes, the 3D glasses making them float and pop off the walls. A demon (actually on a rolling platform) slides through the wall, visible through a small window. Several demons covered in rune patterns appear from hiding spots among the walls, the 3D glasses destroying depth perception and making it difficult to tell where anything in the room actually is.

The guests finally return to the dorm room, where the horribly burnt Louis and Bubba are seen along with several of the demons that have finally broken free of their dimension and now roam in the real world. 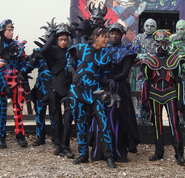 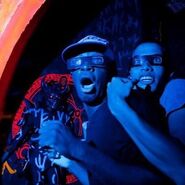 Retrieved from "https://halloweenhorrornights.fandom.com/wiki/The_In-Between?oldid=116138"
Community content is available under CC-BY-SA unless otherwise noted.