The Hollows (North and South) were once of the lands in the dark world of Terra Cruentus, and served as two unofficial scarezones during Halloween Horror Nights: Tales of Terror.

For their 2005 event, Universal created their own demented country that runs on blood and sacrifice. Two of the scarezones would be unofficial, and would be designed as sort of safe-zones. These would be called the North and South Hollow.

The first of these two scarezones, the North Hollow, would be located in Seuss Landing. The area is themed to the various stories of Dr. Seuss, and is located between the Lost Continent and the Port of Entry.

Audrey Giesel (the widow of Dr. Seuss) said that Universal was not allowed to put anything remotely scary in the Seuss Landing area of the park. So, the North Hollow (like the Boo-Ville scarezones before it) remained scareactor-less. The area only had dim lights and fog.

The second of the two scarezones, the South Hollow, would be located in Toon Lagoon. Toon Lagoon is an area of Islands of Adventure located between Marvel Super Hero Island and Jurassic Park. Toon Lagoon featured an homage to many comic book characters, including Popeye and Dudley Do-Right. Unlike The North Hollow, this scarezone was allowed to have scareactors.

This would be the final two years these areas would be used for scarezones, as the Halloween Horror Nights event moved from Islands of Adventure back to Universal Studios Florida.

These are realms of cleansing and rite of passage. Once upon a time, there was one realm in a hideous world of blood and tomes that stood above the rest. Unlike the other land that had the air of death, this land was very different. It was the only place that was filled with hope, a light that beacons in the shadows of the Cruentus people. In that land of which no records existed, there was a specific chime that would emit a harmonious sound, sweet, soft and pure as the fields of what it represented.

But as the world changed, so did the unnamed land. A rift in the ocean caused to the land to separate, creating two different lands. (Maybe an old woman had something to do with it?) Somehow this caused the soil of which they were born to be immersed in a strange essence.

One land was a bizarre sort, that had clouds swirling in the air above which would cause confusion to travelers. The jesters and fools of dance and fun and the Terra Ghouls, black robed creatures with blue undertones, lurked and pranced in the whacked out land. An amphitheater was set here where the fools and jesters would play. It is also where the bodies of the Rituale de Blud's victims are drained of blood before they are buried in the Cemetery Mines of Gorewood Forest.

The other land was far more fearsome. It was equally strange, but for darker reasons. As recorded by a research team (probably the catalyst for Legendary Truth) this was a place where the elements of primeval fear all came to form a realm of terror, particularly when opened by a portal called Maldaken Pass.

The worst of evils made their bay in the North Hollow- within a freezing mountain, light and darkness would intertwine in a disorientating landscape. In a supposedly kindly old grandmother's house, the nightmarish boogeyman from childhood would hide in the closets and the shadows of Elsa's abode. A fortuneteller (no, not that one) named Madame Sandra resided somewhere here, where she held tarot readings and a crystal ball which would foretell the horrors that resided there.

North Hollow was used as a “Testing Ground” by various tribes and clans in the past and now is used by a corrupt monarchy. North Hollow was a no-win situation for unwitting pilgrims- fail the tests; the pilgrims get killed by the beasts in the house and mountain. Win the tests; the pilgrims were prime choices for the citizens of Terra Cruentus to nurture the Gorewood Tree. Dubbed Pure of Heart, the survivors of Maldaken were taken to the Queen’s Throne where their blood would produce the sweet and toxic Bloodberry Wine.

And as for the Chime itself, it was broken along with the once peaceful land of happiness. One part of the chime was corroded by the sea to the north, and the other was tarnished by the winds of the south.

In the times of old when the chime was one

There was only one realm filled with hope and light,

But now two lie in dark within shadows of night

One now twisted, demented and strange,

The other bizarre, evil, deranged,

In the south, the jesters, fools and ghouls rule the night,

To the north beyond Maldaken, a realm of terror and fright

Where clouds and confusion swirl in the dark,

Beware the creatures that each wear the mark,

Cross into the past if you so dare,

The worst of the worst waits for you there

So listen my children and those of pure hearts,

They're searching for you in whole or in parts,

We're waiting for you in whole or in parts

On the map of Terra Cruentus found on the Halloween Horror Nights: Tales of Terror website, visitors could click on and view The Hollows regions of the map. There, they could click on areas for Cold Blind Terror and Where Evil Hides in the North Hollow and Bill & Ted's Excellent Halloween Adventure in the South Hollow to go to their respective website pages. There was also a label for Maldaken Pass in the North Hollow, though clicking on it does nothing. Finally, visitors could click on either of the two broken pieces of The Chime to hear a voiceover clip about the area. 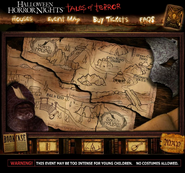 A map of the Hollows.
Add a photo to this gallery

Clip that played when the Broken Chimes are clicked on:

Song that played on the Website Page: Fens of Sargath by Midnight Syndicate

South Hollow (Toon Lagoon) was filled with fog and laser effects to create an unreal atmosphere.

It is unknown if North Hollow (Seuss Landing) carried the same atmosphere but both of them had the Terra Ghouls.

Secret Chamber
Add a photo to this gallery

Retrieved from "https://halloweenhorrornights.fandom.com/wiki/The_Hollows_(Terra_Cruentus)?oldid=114049"
Community content is available under CC-BY-SA unless otherwise noted.