The Harvest was one of the four unofficial scarezones that were featured during Halloween Horror Nights: Reflections of Fear. It was located in Central Park. It returned in 2010, though without the Bloody Mary effect.

The scarezone featured many pumpkins in the trees of Central Park, which would periodically be blown out by Bloody Mary. If one were to stand in the perfect spot they would see from afar the San Francisco building where a large projection of Bloody Mary would play.

It was right next to the Skoolhouse and some of the children would sometimes prance around it. 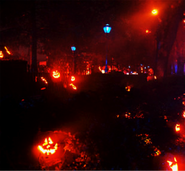 Bloody Mary’s visage in San Francisco as seen from this zone.
Add a photo to this gallery

Retrieved from "https://halloweenhorrornights.fandom.com/wiki/The_Harvest_(2008)?oldid=117807"
Community content is available under CC-BY-SA unless otherwise noted.