The Hallow was one of the eight haunted houses that were featured during Halloween Horror Nights: Reflections of Fear. It was located in Sprung Tent 1.

In 2008, Universal decided to tie in all eight of their haunted houses to patients of Bloody Mary. This haunted house would tie in to Eileen Harrell. She had a fear of myths and legends, particularly the Headless Horseman. She visited Bloody Mary to help cure her fear. Bloody Mary showed her a real severed head, which sent Eileen into hysterics. Eileen was institutionalized due to the incident.

The house would serve as a celebration of all of the classic Halloween creatures. Skeletons, witches and Jack 'O Lanterns would appear in this house.

The Jack 'O Lantern scene from this haunted house would have a tribute scene in the 2015 haunted house, Jack Presents: 25 Years of Monsters & Mayhem.

Where do the traditions we observe each Halloween come from? It is said that every Halloween within the blackest parts of the forest, Samhain, The Lord of the Underworld, lives again and the souls of the damned beckon you. For if you journey deep enough, you will see that Samhain’s traditions are trapped within... THE HALLOW...

Samhain, The Lord of the Underworld has trapped the souls of the damned... and now they call to you!

This house is tied into Dr. Mary Agan's first patient, Eileen Harrel. Eileen was a daughter of one of the children responsible for Mary Worthington's disappearance. She was an illustrator for children's story books and comic books, such as AtomiComics' Creatures!. She soon began to develop a fear of legends and myths, particularly, the Headless Horseman from The Legend of Sleepy Hallow. She was sent to Dr. Agana's office, where the doctor placed her in a locked room with a mirror and a draped object sitting on a table next to it. Harrel was ordered by her to remove the fabric only to scream in hysteria and collapse into spasms when she found a severed human head Dr. Agana borrowed from a morgue. Harrel was sent to an asylum while Dr. Agana was left puzzled by her actions, believing that since the head was merely an inanimate object and unable to physically harm her, Harrel should have no reason to be afraid of it.

This took place in the Myths section of Bloody Mary’s Mirror, alongside the Gentleman of Victorian London. Here, Samhain kept all the traditions of Halloween.

Guests would enter to a hallway like room with a opening in the middle of the wall where a scareactor would scare guests. Then they would enter a forest like room with vines hanging down and pumpkins scattered about. A pumpkin head scareactor would attack guests in this room. Other scenes and scares in the house included one with a witch, one with skeletons, one with heads hanging from the ceiling, The Headless Horsemen, and Samhain.

Images are from the Halloween Horror Nights: Reflections of Fear website until otherwise noted.

The facade for The Hallow. 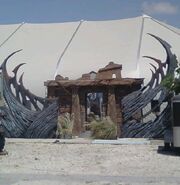 The concept art of a pumpkin headed scareactor that appeared in The Hallow. Picture from the owner of HorrorNightsCollector.

Retrieved from "https://halloweenhorrornights.fandom.com/wiki/The_Hallow?oldid=120269"
Community content is available under CC-BY-SA unless otherwise noted.