The Fearhouse was one of the five haunted houses that were featured during Halloween Horror Nights X. It was located in Nazarman's.

With a completely original icon for Halloween Horror Nights X, Universal decided to build a house based on his backstory. Allegedly, the house was not centered around Jack, but instead was centered around Dr. Oddfellow, Jack's nemesis. Dr. Oddfellow built an evil funhouse called "The Fearhouse" containing insane clowns, which was where this haunted house was set.

The house would be located behind a few of the building facades located in the New York area of the park (called the Nazarman's area). Back in 1993, Universal built structures and alleyways behind these facades specifically for holding haunted houses. This would be the eighth haunted house in this location.

Try and make your way through a carnival where mirrored hallways, darkened corridors and hideous creatures make your escape unlikely.

The following is from Universal Art and Design's presentation manuscript of HHNX- Not Afraid Of The Dark? You Don't Know Jack!

Welcome to Dr. Rich Oddfellow's carnival of oddities. Looking for a good scare, or just a glimpse into the world of the weird? There's nothing subtle about Dr. Oddfellow's carnival. Join the dark doctor in his Funhouse of thrills and chills. Only the facade of this house is darker and more ominous than expected Expect the Unexpected as you move through the mirrored hallways and through the darkened corridors, trying to find a way out. Only the joke is on you. Dr. Oddfellow needs more exhibits for his traveling tour of torture. You move through the world of reflection, tricked at every opportunity. Low-lying fog prevents you from seeing the floor and lighting effects create an unnatural glow. Scareactors images appear in reflections, then suddenly appear in your face. Utilizing illusion techniques combined with hideously deformed masked Creatures. Dr. Oddfellow gives you an unguided tour of Terror through this Nightmarish reflective world. Your challenge - to find a way out!

Guests would enter the house at the entrance to Sting Alley (across the street from the Kongfrontation ride). The facade was a door in a long building that says "Thrills The Fearhouse". On that building was a painting of a clowns face with sharp teeth and the door to the building was his mouth. There was also a long red carpet symbolizing the clowns tongue.

The house would be the first house to open at the event.

According to this, there was a holding room where the lights would turn off. After that, cat paws would scratch at the guests' feet and they would move on with the house.

The house was very disorienting, and featured a wide variety of clowns. Many mirrors were featured in this house, and reportedly the house consisted of Dr. Oddfellow and many of his clown minions. The house was also said to feature many of Oddfellow's torture devices. One room featured a clown swinging on a star from above. Another room had a bunch of Jack in the Boxes with the whispers of children playing through speakers. A giant Strongman and other clowns were also featured. According to this, there was a scareactor wearing car wash strips that blended in with strips hanging from the ceiling. There was also a mirror room and many strangely painted walls, and a room with sliver colored walls.

The facade for The Fearhouse. 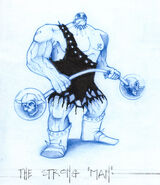 Some of the concept art for The Fearhouse.

Retrieved from "https://halloweenhorrornights.fandom.com/wiki/The_Fearhouse?oldid=97754"
Community content is available under CC-BY-SA unless otherwise noted.