Start a Wiki
'Welcome to the world of The Director. Get a behind-the-scenes look at The Director's latest work and take a look inside his dark mind through his "on the set" interview. Is it time for an Oscar nomination or just a room in an asylum?"

The Director, also known by his real name Paulo Ravinski, was the main event icon at Halloween Horror Nights 13.

The Director also has 3 other names: Paolo Ravinski (his original name for 2003, before 2006 changed it to Paulo), Pavel Pranevsky (for Hollywood's revival event), and Billy Skorrski (for Singapore's first event). This makes the Director and Jack the only icons to have appeared in some form at all three Universal Studios parks that have featured icons.

Paulo/Pavel/Billy Ravinski was born in Eastern Europe. Aspiring to be a filmmaker, he initially started out as a snuff film director, capturing actual human suffering, torture, and death on his movie camera. His first project was a controversial feature known as The Widow's Eye. The film shocked so many of his country population that Ravinski was forced out, which is when he came to America. Law enforcement agencies and film critics call his work snuff cinema. The Director prefers his work to be referred to as "art". Some people found tamer examples of his work, such as The Blood Letting and Death Procession.

Paolo was hired by Universal Orlando to film his newest horror film at their Islands of Adventure park. Here, he turned each area of the park into a living horror movie as part of his dream project. The Director himself would appear in All Nite Die-In at the event. He also hosted his own torture show, where he would subject victims from the audience to horrors on stage, and film their reactions.

The Director would return years later (renamed to Paulo instead of Paolo), with the other icons, for Halloween Horror Nights: Sweet 16 with his own house All Nite Die-In: Take 2. He also took part in the ensemble show featuring each of the four icons performing a kill in their signature styles, where he electrocuted someone in a bathtub.

For a time in 2010, The Director was bound by magic to the Sumerian Demon known as "Fear", and dubbed the representation of "Sacrifice" due to his willingness to sacrifice anything and everything in the name of film.

In 2012, The Director was revealed to be a member of the Legions of Horror; a Strengoit along with Lady Luck.

In 2015, he and his fellow icons reunited for Halloween Horror Nights 25th anniversary.

Paulo was hired by Universal Studios Hollywood to create the ultimate horror movie. Before they allowed production to begin, Universal requested that Paulo submit a short film detailing his project to preview it for executives. However, when Universal viewed the graphic short film which contained real torture and death, they claimed Paulo's sick vision was too graphic for movie audiences. They then had the project cancelled for good, and banned Paulo from ever stepping foot into Universal Studios again. But Paulo did, in fact, take up residence in an abandoned backlot set at the park, vowing to get revenge on Universal. Aware that Paulo was hiding on the backlot, Universal still allowed their annual Halloween event to run in 2006, but warned visitors that Paulo was incredibly dangerous.

The Director appeared at the event in Terror Tram: The Director's Cut, where he would take over the backlot tram tour and subject the riders to horrifying, deadly situations within the various movie sets they toured.

In 2004, a series of fan-produced short films began appearing on youtube featuring The Director character. The videos portrayed him as a combination of the Halloween Horror Nights Orlando and Hollywood versions.

The Director's videos had him hiding out on the backlot of Universal Studios, having been hired by Producer Bob Ferguson to make horror films for Universal Studios, but then subsequently fired by his would-be-mentor amidst rumors of snuff film activities. Paulo was barred from the studio, and his persona was stolen for use in their Halloween Horror Nights event. The Director sought revenge by killing actors, security personnel, and eventually Bob Ferguson himself on the backlot, filming all the killings. He escaped capture and vanished soon after killing Ferguson.

Paulo would return several years later, making new videos, ranting about the sub-par state of Hollywood, and the horror genre, especially his disdain for remakes of classic horror films, even re-cutting a few of his old kills together as a protest to the remake trend. His final two videos featured Paulo hunting down a blogger who wrote about her suicidal tendencies, and after knocking her unconscious and tying her up, he convinced her to allow him to take her life on camera.

Since then, rumors of this version of Paulo showing up at Universal's Halloween Horror Nights events have circulated, along with rumors of vanishing park guests during the event. Images of him attending the event and filming the horror have been found online, but no new videos have surfaced yet.

The series found a small cult following among the die-hard fans of Halloween Horror Nights Orlando, among the numbers of the HHNVault and Horror Nights Nightmares fan boards.

He wears a suit similar to that of The Caretaker, but without the top hat. He has pale-blue to pure-white eyes.

The Director was eventually revealed to be the first icon for Halloween Horror Nights Singapore. This version of The Director has a scar across his left eye and is called Billy Skorrski, indicating that The Director from Singapore is likely a different, but similar, character. 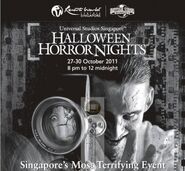 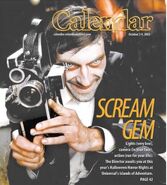 The Director on the cover of the Orlando Sentinel Calendar.

The Director on the main HHN Hollywood 2006 site

Theme for The Director Edit

You Oughta Be In Pictures
Add a photo to this gallery

Retrieved from "https://halloweenhorrornights.fandom.com/wiki/The_Director?oldid=81528"
Community content is available under CC-BY-SA unless otherwise noted.