This article is a stub. You can help Halloween Horror Nights Wiki by expanding it.
"Anything can be acquired, anything your heart desires."

The Curse of Pandora's Box was one of the ten haunted mazes that were featured during Halloween Horror Nights 2019 (Hollywood). It was located in the Tram Warehouse.

Some things are never meant to be opened…sadly for you, someone already has, unleashing unimaginable evil. Welcome to “The Curse of Pandora’s Box” – the living nightmare netherworld of Hades, populated by the most fearsome monsters in Greek Mythology. Prepare for a trip through Hell where the demonic temptress Pandora serves as your guide. Once the box is opened and evil has been released…it can never be closed again!

The facade was a Curiosity Shop called "Pandora's Cabinet of Curiosities". There were glass displays in the facade showing skeletons and other relics. Red lights flashed around the facade and the voice of Pandora could be heard enticing guests to come inside. Guests would then enter the Curiosity Shop.

Inside the Curiosity Shop was many relics and books. Guests would turn around the corner of a glass display of many different animal skeletons before seeing a giant box with a woman's skeleton being grabbed by skeleton hands. The Box would then light up with UV and begin to open on its own. Guests would follow the red light emanating from the opening and enter the box.

Inside the Gates of Hell were skeletons were laying over pits of lava while UV lights would flicker on and off before turning off and staying off for a few seconds. In this section there were two Lava Demons who would blend into the wall and use the darkness when the lights shut off as a way to disappear and then scare guests. Guests would then enter Tartarus.

Inside Tartarus was a collection of cages with skeletons inside and Harpies scattered throughout the scene. The same UV effect from the previous scene was used again here. In this section there were four Skeletons who were inside cages. They would periodically jump out of their cages to scare guests.

Guests would then enter a black hallway with wind blowing and see Harpies on both sides of them as UV lights flickered on and off to reveal them. They would then walk down another black hallway where Pandora would pop out in at the end of the hall before guests entered the Medusa section.

In Medusa's section there was a stone wall with a picture of Medusa on it. UV lights would flash on the picture and change Medusa from normal looking to her with fangs and snakes as her hair. The ruins of stone pillars surrounded the wall. Guests would then go into another room which had more stone ruins, frozen soldiers, and snakes. Guests would exit the scene into a short dark room where Medusa's Head popped out at them before they entered Hades' Lair.

In Hades' Lair were pillars with cobwebs on them and three Living Statues that would act static before popping out at guests to scare them. Also in the scene were the Judges of the Underworld (Minos, Rhadamanthus, and Aeacus). Guests would then walk past a giant Hades stilt-walker that would act asleep before then popping out at as they exited Hades' Lair. 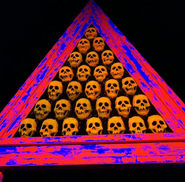 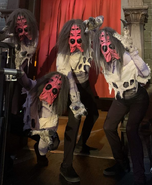 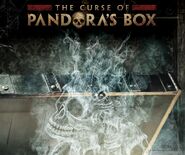 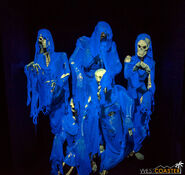 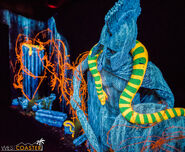 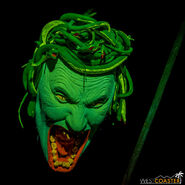 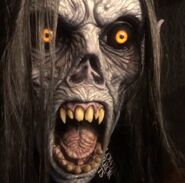 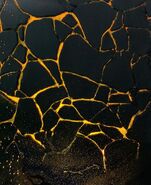 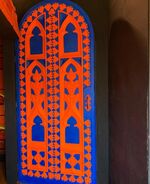 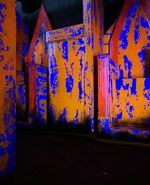 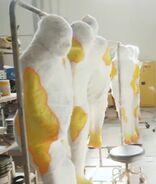 Image from CowMissing
Add a photo to this gallery

Retrieved from "https://halloweenhorrornights.fandom.com/wiki/The_Curse_of_Pandora%27s_Box?oldid=121659"
Community content is available under CC-BY-SA unless otherwise noted.