The Crypt Keeper (also known as The Cryptkeeper) was the second Event Icon to be featured at Halloween Horror Nights He is the from the show Tales From The Crypt, where he served as the host and based on the EC Comics anthology show of the same name.

Born out of freaks at a carnival, he is an orphaned storyteller. He resides in his gothics mansion where he would tell scary stories to guests. Adaru chose him to helm one of the Horror Nights under his command. 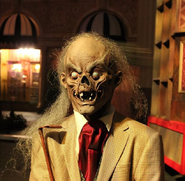