The Crypt Keeper's Studio Tour of Terror was one of the three haunted houses that were featured during Halloween Horror Nights VI. It was located in the Earthquake Queue.

Just like the previous year, The Cryptkeeper would have his own haunted house located in the large extended queue of the Earthquake attraction for Universal's Halloween Horror Nights event in 1996.

This house would not feature The Cryptkeeper's Mansion, but instead would be set inside of a soundstage and a studio backlot. The house would feature many movie related gags with a scary twist added by The Cryptkeeper, who would appear throughout the house.

A relentless series of monsters and maniacs awaits as the Crypt Keeper guides you through a ghoulish studio tour filled with fiendish surprises.

The Crypt Keeper leads guests through a film studio where many of the best horror films of all time were created. The facility was wrecked by an earthquake, causing many toxic gases to enter the film vault and bring the monsters to life.

The map seemingly shows the entrance of this house being to the left of the entrance for Beetlejuice's Graveyard Revue. The queue would most likely go to a backstage area behind the Earthquake building, where the line would loop around multiple times before entering the Earthquake building from the back. The entrance was a broken arch that said "The Cryptkeeper's Studio Tours". The facade was made to look like a movie soundtage (Soundstage 13) with a stone gargoyle next to it.

As with most pre-2000 houses, not much is known about its contents, but it seems to have been essentially just a tour of a movie studio where the guests were scared by various scareactors dressed as monsters and maniacs. The Rat Lady allegedly appeared in this house inside of a wall. The Psycho Shower scene was said to have appeared in this house, as well as an electricity room with a worker getting shocked. From the story, it can be assumed that many famous horror movie scenes were in this house.

All images from the Halloween Horror Nights: Sweet 16 website page. 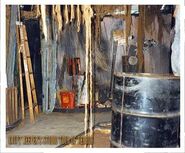 Add a photo to this gallery
Retrieved from "https://halloweenhorrornights.fandom.com/wiki/The_Crypt_Keeper%27s_Studio_Tour_of_Terror?oldid=83712"
Community content is available under CC-BY-SA unless otherwise noted.