The Coven was one of the six scarezones that was featured during Halloween Horror Nights: Twenty Years of Fear. It was located in Shrek Alley.

For their 2010 Halloween event, Universal decided to have a scarezone based on a coven of witches seeking revenge on the people who burned the Salem witches at the stake. The scarezone would be called The Coven and would feature both old and young witches.

The scarezone would be located in an area called Shrek Alley, an area of Universal Studios Orlando sandwiched in between the Shrek 4D show and Soundstage 44 (now Transformers: The Ride 3-D).

Beware the Cult of the Raven! Enter the witches' realm at your peril, as unbelievers will be condemned to death.

The Cult of the Raven has unsettled spirits, and it's Sirens are screaming throughout the witches' realm. As you creep past their obelisk, beware their spells. For those that don't believe will be condemned to death!

Where there are 5 sacred to the Raven, virtue is with the obelisk, for if you don't believe you will be condemned to death! 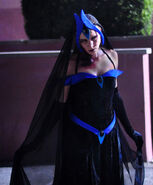 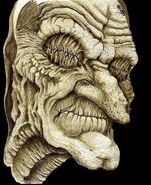 Hags Concept Art
Add a photo to this gallery

Retrieved from "https://halloweenhorrornights.fandom.com/wiki/The_Coven?oldid=105556"
Community content is available under CC-BY-SA unless otherwise noted.