Dr. Albert Caine, better known as The Caretaker, was the second original icon developed and first used for Halloween Horror Nights: Islands of Fear in 2002, Fear gave him control of the 12th annual Horror Nights. His signature weapon is a pair of shears.

This world has been connected... tied to the Darkness[]

Once a well-respected surgeon, Dr. Albert Caine became the caretaker of Shady Oaks Cemetery in Willamette Valley. Caine later converted the Victorian-style mansion he and his family lived in into a mortuary and funeral parlor.

For years during his career as a surgeon, Dr. Caine was intensely interested in the inner workings of the body, what happened to the patients he couldn't save, what happens to a person when they die. Caine and his family eventually used the deceased of the town as guinea pigs in unnatural and bizarre experiments. His demented "extended family", made up of both blood relatives and deranged assistants, dug up the bodies of both the recently and not-so-recently dead and used them for either Caine's experiments, their elaborate "parties", or as house decoration. Caine performed these experiments in an attempt to discover the nature of the soul.

For fresh specimens, Caine would go into the nearby town to find homeless people, and, in what seemed like a charitable offer, invited them to his mansion/funeral home until they got back on their feet. Instead of helping, though, he would perform horrifying surgeries on them, carving them open on the operating table while they were restrained and often fully conscious and without anaesthetic. Caine occupied his time performing acts of the most base cruelty: chemical injections, brutal amputations, live dissections, castrations without anesthesia, electroshock, even organ removal. Caine kept notes and audio recordings, but as time went on and his madness increased these became rambling discussions often delving into the philosophical.

A few of Caine's assistants would sometimes thieve body parts during the surgery when he wasn't looking to use as dinner ingredients, even going so far as to use corpses as playthings in elaborate funeral parlor parties. He also performed experiments in fear, and wished to see how much the human mind could endure before succumbing to madness and death, which resulted in at least one person being buried alive.

The terrible sight was seen by two teenagers who decided to take a walk through the cemetery telling ghost stories. Walking past the gravestones and various monuments they heard music carried on the wind. Following the sound they came across the Shady Oaks Cemetery where they witnessed the Caine family dancing with the rotted remains of decaying corpses.

Skeletons in the Closets[]

"I made the news today." -Dr. Albert Caine, taken from audio recordings from the Caine Funeral Home.

Word of the grisly goings-on quickly spread and the Police launched a massive investigation, Chief Brockett giving the order to place all individuals at the crime scene under house arrest. Instead of resisting, Caine gladly cooperated with the sickened authorities, and even seemed eager to show the results of his "research". Reports of what was found inside during the investigation made headlines that shocked and mortified the nation. The local townspeople, mostly comprised of the relatives of the deceased used in the Caretaker's experiments took matters into their own hands, forming a mob and setting fire to the Victorian mansion and the whole area with the Caine family still trapped inside.

Investigating the remains, investigators were unable to find the body of Caine or his demented family, save for the supposed body of Caine's young daughter Cindy. However, they did find an elaborate network of tunnels running for miles under the graveyard that started in the cellar, which allowed the vandals to retrieve bodies from below. Among the ghoulish evidence was a "Kitchen filled with body parts", "...a large kettle on the stove that contained boiled body parts...", "...a corridor filled with intestines, an eyeball on the stove, boiling brains...", "...a collection of skulls...", and audio recordings, some of which were Dr. Caine's notes, others from his live surgeries, and some that appeared to be an audio diary of sorts. Before the torching of the site, four victims were positively identified and over 2,000 graves were estimated to have been tampered with.

One year later, the Shady Oaks Cemetery had been off limits for all comers until the charred ruins of the Caine Funeral Home were set to be demolished, until the discovery of three unidentified decomposing bodies on the premises. Not long after, people who were last reported in the vicinity of the site began to go missing. Several research teams were sent to the to reopened cemetery to investigate reports of strange noises emanating from the ruin and the Shady Oaks Cemetery, which may be connected to the terrible secrets of its horrifying past. With three teams already gone missing, the question remains: Could Albert Caine and his family have escaped that fire?

The Door to Darkness[]

While it is not confirmed if he is undead or has been alive all along, he still in a sense “lived on”. With the help of his real god, he took control of various creatures such as The Treaks and Foons, the Nightmare, and Carnage; and together, they plunged the Islands of Adventure into a world infected with Albert’s darkness. He still resides in his abandoned mortuary tampering with the brains of his victims to test their capacity for fear.

When Fear was summoned, he chose The Caretaker as one of his minions: DEATH. The Caretaker now has strange markings on his neck, as with the other icons, linking him to Fear.

Later, Bloody Mary and Jack broke him out of the Lantern to participate in the 25th year. During the 30th year, he and his fellow Icons fought within Fear's Lantern to see who would reign supreme.

He appeared in a couple of commercials by Dean Karr in 2002; two of which were in Shady Oaks and one in Sting Alley. The first two had him playing with dead bodies and the third had him stalking a couple in New York. He had plenty of presence in print, such as posters and brochures. There was a interview by the Orlando Sentinel newspaper where he chatted about fears. He introduced the Art of the Scare Documentary (which also revealed his actor's name to be Bryce Ward).

Port Aventura had him as the Icon for their Halloween event in 2003, and reused his commercial dubbed in Spanish.

According to James Keaton, he and 3 other characters (one of which was Dr. Fear) appeared in NYC for a publicity stunt in a news for Halloween Horror Nights XIV.

He was shown among the other Icons for Halloween Horror Nights: Sweet 16. He was the one who cut the cake in the commercial, and had a little jump scare in the hotel commercial that year. While he himself wasn’t a part of 2006 in Hollywood, his mortuary was present in the Director’s ad, as well as a shot of the shears.

He first appeared on the screen for the Port of Evil scarezone in 2002, where he would speak of the creatures that lurked in the event, and was seen in the flesh as a stiltwalker/ barker in Town Square of Tortured Souls. He also had his own icon house that year titled Screamhouse.

2003 is where Port Aventura has him as the icon for their Halloween event that year, appearing as a scareactor that year. According to Dr. Jimmy and Mademoiselle Princesse, he still was used for other Halloween events in that park even after their Universal license was revoked, though in some years he had an axe instead of the shears.

2004 had him in the Horror Nights Nightmares haunted house. 2006 featured him in the Arrival and Sweet 16: The Director's Cut shows, and featured Screamhouse: The Resurrection where he tried to resurrect Cindy. 2009 featured him in the unofficial Shadows of the Past scarezone. In 2010, he appeared in the Main Gate video (a slightly edited version of the Warehouse eXXperience vid from the website) and had him in front of his hearse in Fear Revealed. He also appeared in the Horror Nights: The Hallow'd Past haunted house that year.

In 2013, he made a cameo appearance as a statue in the Cabin in the Woods haunted house. Finally in 2015, he returned to celebrate the 25th Halloween Horror Nights year by appearing in both the Jack Presents: 25 Years of Monsters & Mayhem haunted house and the ICONS: HHN scarezone.

In 2021, The Caretaker would appear alongside his fellow icons and have his own section in the HHN Icons: Captured haunted house.

He delights in the process

Of prepping a corpse

Caring for the graveyards

He looks upon you each,

With a judgmental eye

Sizing you up for

When it's your time to die

But the Caretaker is impatient

And he will not wait,

For circumstances to deliver

He'll act on his own

If given the chance

In moves that are silent

In a last macabre dance

The Caretaker appeared as a tall and withered old mortician with a sunken skull-like face and dressed in a tattered suit with matching top hat, often seen with his signature weapon, a large clamp/claw that was a cross between a hedge clipper and a surgical clamps.

While Dr. Albert Caine may have once been passionate about saving lives, by the time he began his expeiments that statement could not be further from the truth. His diaries showed that he was a doctor who had gone mad with the power he had over first the dead, then his living patients. In his vanity, he fancied himself as a pioneer in his self-styled field of research, and in spite of the horrors in the back rooms, took a measure of pride in keeping up the appearance of a professional funeral director. 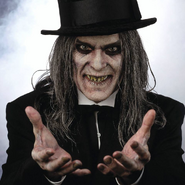 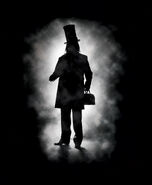 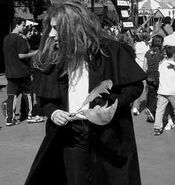 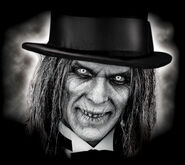 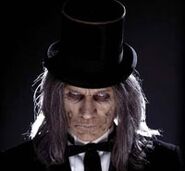 The Caretaker in the queue for Screamhouse. Image from Jared Clemons on Facebook 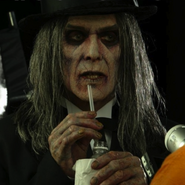 The Caretaker in Shadows from the Past. Image from Halloween Horror Nights fans Myspace.

The Caretaker in Fear Revealed. Image from Jared Clemons on Facebook.

The Caretaker pumpkin in Central Park during Halloween Horror Nights: Twenty Years of Fear. Image from Jared Clemons on Facebook.

The Caretaker in ICONS: HHN.

The Caretaker's poster in the 2020 Tribute Store. Image from HorrorUnearthed. 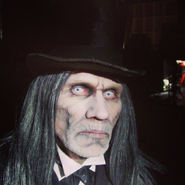 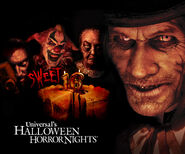 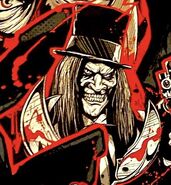 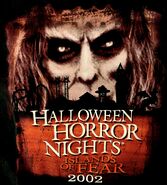 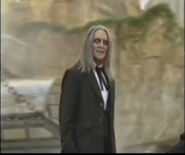 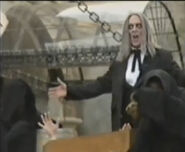 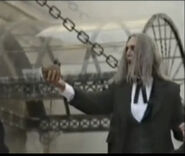 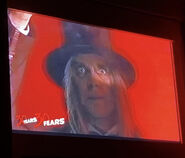 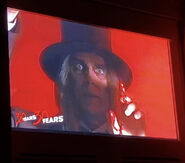