Terror Tram: The Director’s Cut was both The Director's icon attraction and the signature attraction of Halloween Horror Nights 2006 (Hollywood). It was located in the Backlot.

"TERROR" TRAM": "THE DIRECTOR'S" CUT
This is "Halloween Horror Night's" marquee attraction. It's also where "The Director" is casting for his underground film and where guests will be blind-sided into an open casting call - completely unbeknownst to them. They'll congregate as spectators while "The Director" observes from afar as he systematically selects who'll make the cut...and who won't. Once they disembark the tram and serendipitously stroll down a Zombie infested area, they'll bear witness to unspeakable acts of mayhem. Guests may never be the same again once they experience the Sorority Party massacre, become prey to Killer Clowns and traipse through decaying corpses at the "War of the Worlds" 747 jetliner wreckage site.

Voice clips from The Director/Pavel would be heard as “extras“ walked down the escalator.

Guests made their way to the trams, and the trams would take them on a small detour to a specific part of the Universal Backlot where The Director was casting his underground film. Video monitors displayed details about The Director and the entire event. The Director, also known by Pavel Pranevsky (not Paulo Ravinski, his revised name in Orlando) was granted complete artistic freedom for the movie he was going to shoot for Universal Pictures. However, the disturbed artist already used his power too much: he filmed short films of real torture and death. He escaped security, and now guests are entering a part of the film specifically themed to him. The "extras" must now make their way through the living "horror movie" and survive through Pavel's minions and tests.

Tourists were dropped off on a part of the Backlot and made it to these proceedings as provided by Mr. Pranevsky (all sections had The Director personally put a title on them).

Send in the Clowns (Whoville)

Whoville was covered in blacklit drawings of Clown imagery. Clowns of all ages of time (Punk Clowns, traditional clowns) under the Director's control attacked and mingled with the guests.

Pranevsky's "remake" of Psycho had clones of the undead mother of Norman Bates and Bates himself attack guests with knifes. The infamous Psycho theme played and the real film by Hitchcock could be seen playing on a small TV.

On the path upward (Pavel's title for this is unknown), a zombiefied Butcher was joking around with guests, inviting them to have "fresh meat" that lay on the unmoving trams nearby

Bizarrely titled by The Director, a pig masked scareactor with a chainsaw was lumbering around next to a woodsy set of a torture scene. The victim was having her/his face cut off and would complain that guests are recording him/her rather than helping.

This torture scene was situated by the Bates Mansion, where Bates mother would insult her son. Norman was staling his front yard, sometimes taking a photo op with guests if he could.

There Goes The Neighborhood

In the faux finale of Pavel Pranevsky's masterpiece, the War of the Worlds set was slightly refitted for a zombie invasion theme.

Guests then faced off with The Director's chainsaw minions as they made it to the tram.

But Pavel wasn't finished. Just before the Mummy's tomb (and after the first week), The Director was finally shown in person killing somebody with a wood-chipper. The Director sent into Imhotep's sandstorm, where on the monitors, he displayed shots of himself interspersed with scenes from his favorite horror films. For the "final Cut", the Director somehow managed to "chainsaw" the guests (in reality they used a water effect). Those who did make the Cut can now enjoy the rest of the time in Pavelland. 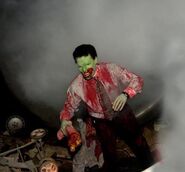 An unused character that would have been seen in the War of the Worlds section. Image from Jon Murdy on Twitter.

Image from Hollywood Gothique
Add a photo to this gallery

Retrieved from "https://halloweenhorrornights.fandom.com/wiki/Terror_Tram:_The_Director’s_Cut?oldid=117755"
Community content is available under CC-BY-SA unless otherwise noted.