Terror Tram: Scream 4 Your Life was the terror tram that was featured during Halloween Horror Nights 2011 (Hollywood). It was located in the Backlot.

Go behind the bloody scenes of the Universal Studios Backlot where many of Hollywood's most horrific scary movies are currently filming. Rumors of tourists being killed by a cloaked murderer have begun to emerge, but the Ghostface Killer couldn't be real... or could he?

Feel your heart pound and your hair stand on end as you succumb to the mass hysteria during this bloodcurling tour of terror.

Enjoy the show as you embark on the ride of your life... literally! 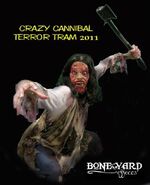 T-Shirt Logo
Add a photo to this gallery

Zombiez on a Plane - Teaser Trailer

Freakz and Tweakz - Teaser Trailer
Add a photo to this gallery

Retrieved from "https://halloweenhorrornights.fandom.com/wiki/Terror_Tram:_Scream_4_Your_Life?oldid=119344"
Community content is available under CC-BY-SA unless otherwise noted.