Terror Tram: Live or Die was the backstage tour that was featured during Halloween Horror Nights 2009 (Hollywood). It was located in the Backlot.

Once everyone was loaded into the tram (dodging the various zombies on the way) the tour guide would play a short trailer for the event, mostly composed of Saw footage. When the video was over, the tram would then start moving and the tour guide would introduce themselves and the driver. After the introduction and the safety announcement, the tram video would then be 'hijacked' by Jigsaw a.k.a John Kramer with the help of Billy the Puppet. Kramer would then give a monologue about the experience the guests would then find themselves in:

"Hello. I want to play a game. All of you are here tonight for one reason: you want to be scared. You want to know the thrill of being close to death, without ever having to confront it face to face. This is why you watch horror movies. To experience death at a safe distance. Well, tonight all of that is about to change. When this vehicle stops the doors will open and you will get out and walk through a series of test, tests inspired by the very horror movies that you are so obsessed with.

Have you ever asked yourself why you watch horror movies? Then let me ask you, Don Roberts: for you and your friends horror movies are an act of rebellion, you're drawn to anything your parents object to. But do your parents know about your other hobbies? The acts of vandalism that you have committed? You'll do anything to leave your mark. But now you are the one who is marked. Tag. You're it.

And you, Sherrie Mathews. You say that horror movies give you a rush of adrenaline. But adrenaline is not the only thing coursing through your veins, is it Sherrie? Do your friends know about your secret addiction? Do they know about the things you have stolen from them, to feed those addictions?

And what of you, Charles Roebuck? You say horror movies are just an escape. But what are you running from? Could it be the alcoholism that ruined your life? Even now, do you feel the weight of that bottle you've got? Hidden away in your jacket? The one you snuck past security?

The day of reckoning has arrived for all of you. But to survive this test, you are going to need help. You see, this is a group test. And to succeed you must survive it together. The game is about to begin. Will your selfish, individual needs trump the safety and wellbeing of the group? Remember: stay together. For even if one of you doesn't make it to the other side, you will all pay the ultimate price. Lose one. lose all. Live or die. The choice is up to you. Let the game begin.

With that, the guests are let out of the tram, and into the back lot.

All images from xhalloweenhorrornightsx's MySpace. 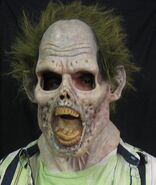 From Theme Park Review
Add a photo to this gallery

Retrieved from "https://halloweenhorrornights.fandom.com/wiki/Terror_Tram:_Live_or_Die?oldid=116020"
Community content is available under CC-BY-SA unless otherwise noted.