Terror Mines was one of the seven haunted houses that were featured during Halloween Horror Nights: Tales of Terror. It was located in Poseidon's Fury.

For their 2005 event, Universal created their own demented country that runs on blood and sacrifice. One of the houses they chose to have at the event was one that takes place in a dark mineshaft inhabited by various disturbing creatures.

This house was the first haunted houses that made guests wear light helmets. The house was purposefully kept very dark and the only way guests could see was from a light helmet given to every twelfth guest. The light would occasionally flicker and strobe for added effect.

For the first and only year, Universal would use the Poseidon's Fury walkhrough attraction to hold a haunted house. Universal closed the ride down and placed props relating to the house around the actual attraction. This would be the final year the building was used to hold a house, as the Halloween Horror Nights event moved from Islands of Adventure to Universal Studios Orlando.

The light helmets would return the following year in 2006 for the haunted house, The People Under the Stairs: Under Construction.

A darkened mine shaft leading to the underworld has created a FIRST-OF-ITS-KIND EXPERIENCE where you control (or do you?) the only source of light.

Long rumored to be the underground source of a vast power that fuels Terra Cruentas above, the Abysmal Deep can only be reached through the twisting tunnels of the Terror Mines. Inadvertently unearthed in a terrible mining tragedy, savage subterranean creatures now live in constant battle with Dragon Forge miners and mankind interlopers.

The Terror Mines was a mining system created by miners of the Dragon Forge. It is said that these mines contain the Abysmal Deep, a vast power that fuels Terra Cruentus. While searching for minerals to aid in the process of creating the Terra Blade they uncovered Gnomerats, ancient creatures who know more about the origins of Terra Cruentus than anyone else in the land. Ever since the miners encountered the Gnomerats, they have been in constant battle.

On the map of Terra Cruentus found on the Halloween Horror Nights: Tales of Terror website, visitors could click on and view the Dragon Forge region of the map. There, they could access the page for the Terror Mines by clicking on a mining helmet. The page showed a layout of the Terror Mines on a desk.

Clicking on it, visitors would be transported to a very dark screen, with the only source of light being their mouse. Visitors would be able to click on five Terra Cruentus symbols on the layout. From top to bottom, the first caused a jumpscare by a Gnomerat, the second and fourth caused short videos to play, and the third and fifth showed notes from Guderalle. 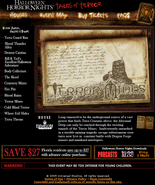 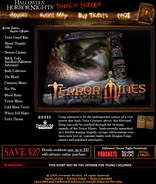 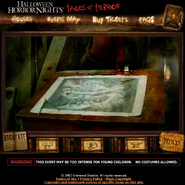 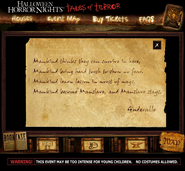 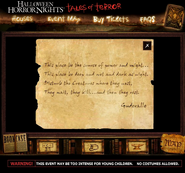 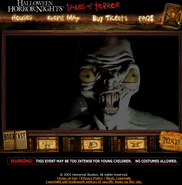 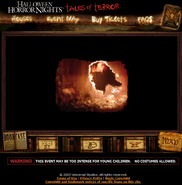 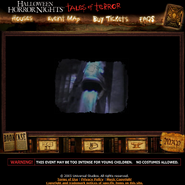 Song that played on the Website Page: Ancient Temple by Midnight Syndicate

Audio that played when the first symbol was clicked on in the Backstory Page:

Audio that played when the second symbol was clicked on in the Backstory Page:

Audio that played when the fourth symbol was clicked on in the Backstory Page:

Guests would enter the queue for this house in front of the Poseidon's Fury attraction, right where the entrance to the actual attraction is. The queue most likely went down the regular queue of Poseidon's Fury, until eventually reaching the haunted house.

The house was very dark and the only source of light in this house would come from a miners helmet with a light on it given to every fifth person. The light on the helmet would randomly turn off and create a strobe effect. The water vortex in the actual ride was a room, with various props on both sides. One room had treasure and a corpse trapped in a spiderweb. There were many mineshafts, some of which had the Fire Pits symbol on it.

Image from Jared Clemons on Facebook.
Add a photo to this gallery

Retrieved from "https://halloweenhorrornights.fandom.com/wiki/Terror_Mines?oldid=93497"
Community content is available under CC-BY-SA unless otherwise noted.