Terra Cruentus (also known as Terra Cruentas) was a land ruled by the Terra Queen. It was the location of the story of Halloween Horror Nights: Tales of Terror.

In this world of Terra Cruentus, separate realms share a common devotion and fear of the Terra Queen and the thunderous Black Guard of Iron Bone Gorge.

Increasingly coded pennant, these realms exist in an uneasy balance of need and want. Where a limited supply is always short of an insatiable demand of fresh human blood. For it is the human's life blood that nurtures the root system the towering, twisted Gorewood Tree, a hideous hybrid of unnatural growth that resulted from a black oak sapling taking root in the crimson-soaked soil of an ancient battlefield where enzymes and human remains dissolved rare metals in the earth that were absorbed into the roots, veins and brass-colored bark of a tree that grew very slowly and very strong.

Ultimately becoming mineral than vegetable with thick, iron-like vines that every season produce clusters of the plump, purple Blood Berry. And upon a grotesque altar carved from this deformed growth, a nightly ritual is performed with fresh sacrifice, virgin Blade and a renewed devotion to the Terra Queen.

Sustained by an addiction through the intoxicating wine extracted from the forbidden Blood Berry fruit, the Bone Chopper Riders of Iron Bone Gorge celebrate their devotion to the blood-shrined worship and maintain an iron fisted order in lawless lands as they travel to the other realms.

To the fog-enshrouded groves of South Hollow, where the pure of hearts are cleansed of blood before departure to burial in the macabre Cemetery Mines of Gorewood Forest, a dark and foreboding realm of internment, patience and metamorphosis. Where bone turns slowly to iron and flesh turns slowly to stone and the Body Collectors wait to ply their gruesome trade.

Then the Bone Choppers descend on the blistering Tangleroot Fire Pits of Dragon Forge where processed remains are shaped from bone to molten iron and from smelting ore to creation of the Blade itself, tempered in vats of fresh human blood.

Carrying the virgin Blade, the Bone Choppers travel through the North Hollow passage of Maldaken and its tests of survival to return circle to the base of the thick, twisted Gorewood Throne of the Queen.

Pledge allegiance to the Queen and Earth from which she's born 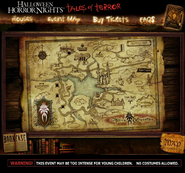 Map of Terra Cruentus from the 2005 website.
Add a photo to this gallery

Retrieved from "https://halloweenhorrornights.fandom.com/wiki/Terra_Cruentus?oldid=110842"
Community content is available under CC-BY-SA unless otherwise noted.