Superstitions (a.k.a Superstitions: Expect the Unexpected) was one of the five haunted houses that was featured during Halloween Horror Nights XI. It was located in Nazarman's. It was an old abandoned warehouse with relics of urban legend. It was also occupied by some mythical creatures, such as the Hookman, Chupacabra, and Bloody Mary (no not that one).

In 2001, Universal decided to have yet another haunted house behind a few of the New York building facades (called the Nazarman's area). Back in 1993, Universal built structures and alleyways behind these facades specifically for holding haunted houses. This would be the ninth haunted house in this location.

The house would be based on many superstitions and urban legends. Due to the 9/11 terrorist attacks, the house was toned down a little bit.

Explore a hidden warehouse filled with ancient relics and urban legends that will have you believing in the supernatural.

The recently discovered warehouse of archeologist Theodore Raven, an expert in the occult and supernatural, is the setting for this terrifying haunted house filled with ancient relics and urban legends. Guests encounter every superstition imaginable, from broken mirrors to black cats, as they plunge deeper and deeper into a superstitious nightmare.

Throughout the haunted house, a voiceover can be heard reciting the story of the superstition as you arrived in that specific room. One of the first rooms featured the Chupacabra, a creature with glowing eyes and a large snake-like tongue. Its glowing eyes can be seen in this room. Next was a Roswell, New Mexico room, which was based on the famous UFO crash that occurred there. In this room, a dummy would attack guests from above. After that guests would enter the Bigfoot room.

Rooms in this house included one representing broken mirrors, black cats (with lots of meowing and hanging black cats, as well as a scareactor covered in cat scratches), hanging burlap sacks, witches, Bloody Mary, a Yeti, and the Hookman. Apparently, there was also a tall shadow that says "I see dead people" into your ear. There was also apparently black and white striped walls in the broken mirror room with a head popping out.

According to this, there was a "walking under a ladder room", a room filled with cracks (step on a crack, break your mammas back), and a room representing the myth where if you swallow a watermelon seed one grows in your stomach, which featured a dummy with his stomach blown open by a watermelon. 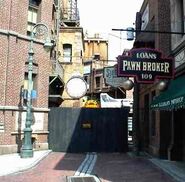 Image from the now defunct HHNVault.
Add a photo to this gallery

Retrieved from "https://halloweenhorrornights.fandom.com/wiki/Superstitions?oldid=105577"
Community content is available under CC-BY-SA unless otherwise noted.