Stranger Things was one of the ten haunted houses that were featured during Halloween Horror Nights 29. It was located in Soundstage 25.

On March 27th, 2019, Universal announced that a haunted house based on seasons 2 and 3 of the TV show, Stranger Things would be coming to their Halloween Horror Nights event that year. It would serve as a sequel to the previous year's house. The codename for this house was "dog", a reference to the demodogs.

The house would be located in Soundstage 25, one of the largest soundstage facilities designed to be used as filming locations for movies and television shows.

STRANGER THINGS returns to Halloween Horror Nights™ in an all-new haunted house, plunging you even further into the chilling world of the Upside Down.

RETURN TO THE UPSIDE DOWN

Prepare to go even further into the chilling world of the Upside Down as STRANGER THINGS returns to Halloween Horror Nights in an all-new haunted house.

Come back to Hawkins, Indiana, where a shadowy new evil threatens to envelop the entire town. Experience the most terrifying moments of STRANGER THINGS 2 & 3 as you come face to face with snarling Demodogs and scream through iconic scenes from Hopper's cabin to the Starcourt Mall.

But this time the Mind Flayer is hunting you, and it won't stop until everyone is under its power.

The queue entered to the left of the Halloween Horror Nights shop. The line would follow a road to the right of the Us line where it would take a right into a series of loops. After the loops you continue down the road to the front of Soundstage 25 where after one final loop would lead you to the entrance of the house.

Guests would enter the house through Hawkins Middle School where they could see a Demogorgon jump out from behind a door. Eleven would then come out and pin it to the wall. Next, guests would continue down one of the schools hallways, where they could see Eleven jumping out of a door. The following room is the transition room to the season 2 portion of the house. The room is themed to the Palace Arcade and featured snow and six arcade machines, all playing the Stranger Things 2 title sequence. Outside of a door, guests could see Will Byers looking at the Mindflayer in a red storm.

After that, guests would walk into a small room with trashcans, where Max Mayfield would jump out wearing a Michael Myers costume. The following room featured the Upside-Down Byers Bathroom where guests could see Will in the real world coughing over a sink into the mirror. The next room features Dustin's house, where his glass cage for D'artagnan's cage is seen empty. A grown up D'artagnan can be seen eating Mews (Dustin Henderson's cat). Dustin then jumps out wearing hockey gear. Guests then enter Dustin's basement where Steve Harrington jumps out with a flashlight.

The following rooms take place in the upside down, with long dark tunnels with vines. Scareactors jumping out in these tunnels included Sheriff Hopper, two Hazmat Suit-Wearing Soldiers, and two Demodog puppets. After that, guests would enter the junkyard, where Steve jumps out with a baseball bat. Then, they enter the old trailer, where Dustin talks on his radio as a Demodog attacks from above. Next, guests would enter the Hawkins Laboratory, through a room featuring nine T.V. screens showing the havoc in the lab. Going down a short hallway, guests would see a security man shooting into an elevator. Going further into the Hawkins Laboratory, guests could see Hopper shooting at a few Demodogs that were eating Bob Newby. The final room of the Stranger Things 2 portion of the house features Sheriff Hopper and Eleven closing The Gate as a Demodog attacks guests from behind. Demodogs could also be seen crawling on the walls in this room.

The next room was the transition room fore the Stranger Things 3 portion of the house, with Eleven sitting in front of a static T.V. blindfolded, a bathtub and a red door appearing on the left, and a FlayedBilly Hargrove attacking on the right. After that, guests would enter the Brim Born Steel Works, where a flayed Heather Holloway would jump out on the right. Going further into the steel mill, a fleshy rat could be seen jumping off a table while a Flayed Billy attacks on the left. The final room of the steel mill features another Flayed jumping out with piles of body parts stacked around. Guests would then enter the Hawkins Memorial Hospital, where Nancy Wheeler attacks on the right and the Hospital Monster attacks on the left.

The following room featuring Hopper's Cabin, where the Mindflayer could be seen crashing through the roof. Also in this room were Nancy Wheeler, Eleven, and Mike Wheeler (sometimes replaced by Max Mayfield). Next, guests would enter the secret base under the Starcourt Mall, where they could see an endless hallway in front of them and Sheriff Hopper with a machine gun to the right. Guests would then enter the foodcourt of Starcourt Mall, where a giant Mindflayer puppet could be seen, as Lucas Sinclair tries to shoot it with fireworks. The outside of Scoops Ahoy could also be seen in this room. Further into Starcourt, guests would enter a small room, where Erica Sinclair would jump out. The final room of the house featured a long hallway of curtains, with a Demogorgon jumping out from behind a door at the end. Guests would then exit the house. 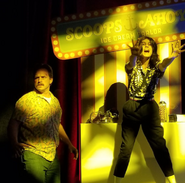 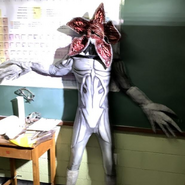 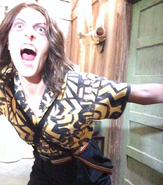 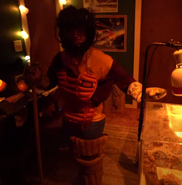 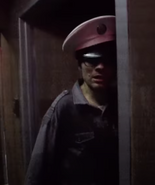 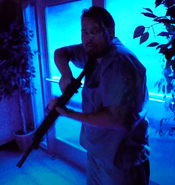 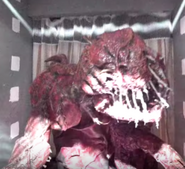 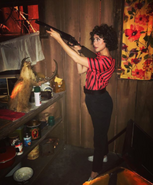 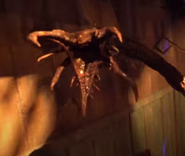 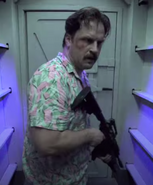 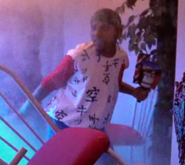 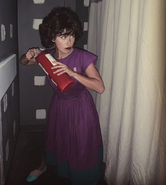 Retrieved from "https://halloweenhorrornights.fandom.com/wiki/Stranger_Things_(Orlando_2019)?oldid=112461"
Community content is available under CC-BY-SA unless otherwise noted.