Stranger Things was one of the ten haunted houses that were featured during Halloween Horror Nights 28. It was located in Soundstage 22.

On April 3rd, 2018, Universal announced that a haunted house based on season 1 of the Stranger Things TV show would be coming to their Halloween Horror Nights event that year. The codename for this house was "Fireball", a reference to Dungeons and Dragons.

The house would be located in Soundstage 22, one of the smaller soundstage facilities designed to be used as filming locations for movies and television shows. The house would be very popular, and would go on to win the House of the Year award in 2018. The following year, the house would get a sequel based on seasons 2 and 3 of the show. It would also be called Stranger Things.

Halloween Horror Nights™ takes you deep inside the haunting world of Netflix’s STRANGER THINGS. The Demogorgon is hunting in our world now.

The Demogorgon is hunting in our world now. Halloween Horror Nights takes you deep inside the haunting world of STRANGER THINGS. From a secret government lab where vile human experiments have opened the gates of chaos, to the terrifying emptiness of the Void. From the darkest corners of Hawkins, Indiana, where homes and walls offer no protection, to the monster-filled reality of the Upside Down. As you try to escape these nightmares, in footsteps of the show’s heroes, you are certain of only one thing—The Demogorgon is moving closer.

When the guests entered the soundstage, they were greeted with the inside of the Hawkins National Laboratory as it appears in the opening scene of the show. A Demogorgon would pop out on the right, and in front of the guests was a scientist that was hung on the ceiling. Pressing the blue elevator button would make him wiggle. A small dark room with a Demogorgon came after that. The guests would then enter a room where the logo for Stranger Things formed on a screen. After that, they would enter the fenced area outside of the laboratory which led to Mirkwood, where another Demogorgon would pop out. Dustin (talking to Mike via walkie-talkie) was outside of the Byers shed. The guests would then enter the shed, where Will could be seen with a shotgun and another Demogorgon popped out.

The guests would then walk to the outside of the Byers house, where Mike (sometimes replaced with Lucas Sinclair) would appear from behind some sheets. After that they entered the house, where Christmas lights would flicker and letters could be seen written on the walls. Joyce could also be seen destroying the walls of the house with an axe and on the wall next to her an outline of a Demogorgon can be seen trying to come through the wall. The guests walked past the kitchen, where Steve (Sometimes replaced with Nancy with a gun) would pop out with his nail bat. Then the guests would walk through one of the hallways of the house, where a Demogorgon would jump out of a door on your left and another will come out from behind a painting that drops down on your right. The guests would continue down the hallway until they reached Will's room, where they would then enter the Upside Down.

The guests would then go through a cave leading to a forest where Nancy would jump out along with another Demogorgon. After that, they entered the upside-down version of the Hawkins National Laboratory where Sheriff Hopper and a few other people in hazmat suits would shoot at them. The guests then entered an upside-down library (with the corpse of Barb and the still alive body of Will stuck in the wall) where Joyce and Hopper would pop out in hazmat suits. They would then enter the Hawkins Middle School, where a Demogorgon could be seen behind a wall. Two Hawkins Agents jump out with their eyes bleeding, caused by Eleven who could be seen inside of a classroom killing the Demogorgon. After that is a dark corridor with two Demogorgons popping out. At the very end of the house, Eleven and one final Demogorgon would pop out. 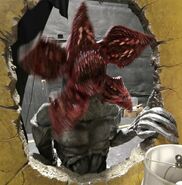 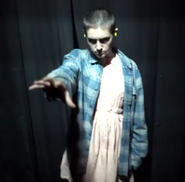 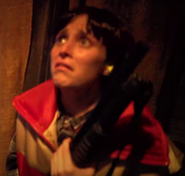 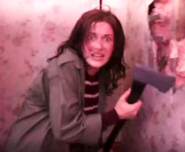 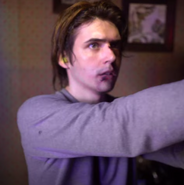 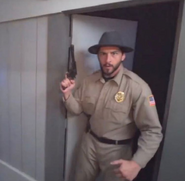 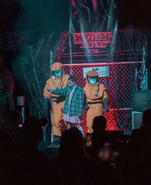 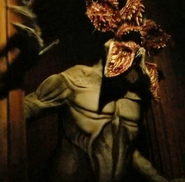 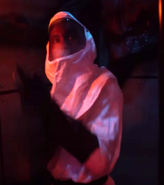 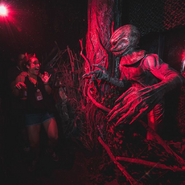 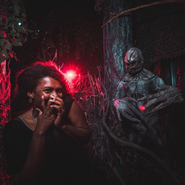 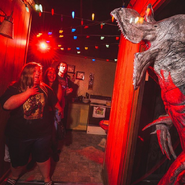 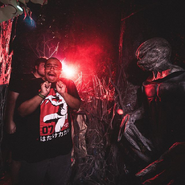 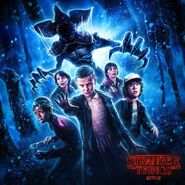 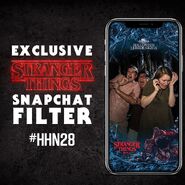 Walking Through the Upside Down

Retrieved from "https://halloweenhorrornights.fandom.com/wiki/Stranger_Things_(Orlando_2018)?oldid=117169"
Community content is available under CC-BY-SA unless otherwise noted.