Scary Tales II was one of the five haunted houses that was featured during Halloween Horror Nights: Islands of Fear, and the second entry in the Scary Tales franchise. It was located in the Popeye and Bluto's Bilge-Rat Barges Queue.

In 2002, when Cindy was planned to be the icon for the Halloween Horror Nights event that year, there was a haunted house designed to be a sequel to the popular Scary Tales house from the previous year. The house would be called Scary Tales Volume 2: Malice in Terrorland, and would feature both returning and new twisted fairy tales, as well as many disorientating rooms featured in the first house.

It would be located in the large extended queue for the Popeye and Bluto's Bilge-Rat Barges attraction, which is located in the Toon Lagoon area of the park. Due to the linear nature of Islands of Adventure, it was designed to be the second haunted house that guests would enter.

After Cindy was scrapped as the icon, the name of the haunted house changed to Scary Tales II. Other than that, the actual house remained the same.

The Scary Tales concept would not return again until the 2008 event, which featured the scarezone Fractured Tales and the haunted house Scary Tales: Once Upon a Nightmare. That haunted house would be very different than the first two Scary Tales houses, as it would remove all of the disorientating rooms and have a story as to why all of the fairy tales became messed up.

Step into the pages of the grimmest fairy tales ever told, where nobody lives happily ever after. In fact, nobody lives.

These were already troublesome stories and fables made even more unbearable by Albert Caine aka The Caretaker.

Guests would enter the queue in front of the S.S. Olive. The facade was the head of a giant rabbit looking creature with pointy sharp teeth and a book behind it. The rabbit had a monocle that would glow. You entered through its mouth.

After entering the mouth, guests would walk up some stairs, where they heard children singing and humming. Near the beginning, guests would walk into a room with many toys, and a floral wallpaper. A Raggedy Anne doll would jump out from behind a wall. The following hallway had smiling mouths painted on the walls. After that, guests would enter a padded room with dead, decaying lambs hanging from the ceiling. Mary would jump out holding a disemboweled lamb. The next room featured a Jester. In one room, a creature (most likely the Cheshire Cat) would have a spotlight that would shine on him. There was a room featuring Little Miss Muffet who was presumably turned into a spider. She would sit on her tuffet staring at guests from behind some spider webs. There was also another spiderweb in the room presumably holding one of her victims. The next room featured the Treaks and Foons.

After that guests would enter the "Psychopath Room", which was covered in white and black stripes with a scareactor blending into the walls running down a hallway towards guests.

Another room was a cornfield with a doll pinned to the wall and cornstalks hanging from the ceiling. A scarecrow would jump out from behind a fence. Guests also entered Grandma's cottage, where the wolf could be seen dead lying in Grandma's bed. Grandma would then jump out with the wolf's head in her hand. She would also sometimes pretend to be eating it. There was another outdoor themed area, with fences lining the path. On these fences were people with bags on their heads. A Pumpkin Head would jump out at guests from behind one of these fences. The finale featured the Headless Horsemen and The Three Little Pigs (the pigs held chainsaws).

According to this, there was a voice-over of man reciting nursery rhymes creepily with a demented twist and eerily music. A bloody white rabbit with a noose tied around his neck appeared in one scene. A Princess and Alice also appeared. According to this, there was a scene from the Princess and the Pea. The house also seemed alot quieter than normal, with no music being heard through most of the house. Many of the rooms were also outside.

The façade for Scary Tales II. 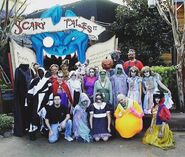 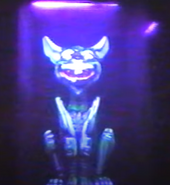 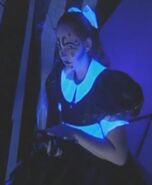 Image from the Art of the Scare documentary

Image from the Art of the Scare documentary.
Add a photo to this gallery

Retrieved from "https://halloweenhorrornights.fandom.com/wiki/Scary_Tales_II?oldid=117524"
Community content is available under CC-BY-SA unless otherwise noted.